Which Stove Burner Is Indisputably the Best? We Asked Pro Chefs and a Nuclear Physicist

Experts say the answer is far more complex than 'I LIKE THE BOTTOM-RIGHT!!'

Last week, yet another important argument broke out on Twitter — this time, about which stove burner is the “best.” Lots of people have a favorite, sure. But are some burners intrinsically better than the others?

The bottom-right burner, most agreed, was the most-used and preferred burner among certified adults.

It seems like a silly debate. Aren’t all burners the same? Doesn’t it just come down to which one is closest to your dominant hand? Not so fast! There’s a science to maximum burner efficiency, and I asked experts to break it down.

Here’s what an executive chef in Las Vegas, a nuclear physicist in Tennessee, a line cook, a professional caterer, a YouTube host and even my own mother (the best cook I know) had to say.

Depending on what we are cooking, the front burners are always optimal. First and foremost for safety, it is never recommended or safe to reach over an open flame. We always promote safety first in our kitchens. I traditionally don’t like to pick between a right or left burner — however, depending on the industrial ranges and the meal you are preparing, whether I am at home or in a restaurant – I always prefer to work left to right. You want to be systematic so you know what you started cooking first.

The first item on the burner is always the first entrée served, then you move that dish to the right burner and then begin cooking the second dish on the left burner. Safety, flow and efficiency are the key factors to take into consideration when picking a burner.

First off, I don’t know a serious cook who doesn’t prefer gas to electric ranges; gas is much quicker to respond to changes, gets hotter than electric ever could, and is easier to tell when its on.

The burners I use the most are the “power burner” (generally the biggest front burner) and the simmer burner (smallest back burner). The power burner is for the quick sear, boiling water, etc. If I only had one burner, this good guy is it, because it has the most firepower (literally). If I were awarded a second, the simmer burner is for the low and slow application (keeping a sauce warm, simmering chili, etc).

Aside from those, I don’t use the other burners unless I’m out of room or if I’m toasting tortillas for a crowd.

I am definitely partial to some burners over others. I like my largest, most powerful burners for boiling water quickly for pasta or large batches of grains. I also use a larger burner when I am trying to brown foods in a large skillet and need even heating. Whereas, I prefer my smaller burners when I’m doing more delicate work like warming soup, cooking sauces or melting chocolate.

My product experts have advised most residential units have different-sized output burners. The honest answer is that the functionality will vary from unit to unit and cannot be concluded due to the difference in each unit. I apologize we were not able to give you a solid answer as it will solely depend on the unit in reference.

My Mom, the Best Cook I Know, Who Cooked for Five Kids for 30 Years

So some marketing department or some design engineer somewhere decided it was a safety feature for stupid right-handed people who can’t figure out how not to put the handle in the middle of the stove and get burned, and that’s why people use bottom right more than anything. And thus I have to wonder if it’s a chicken-and-egg situation: is it the best, or is it just people’s favorite because they’re lazy and right-handed?

People are really overthinking this. All that really matters is properly matching the cooking vessel with the burner size. Use cast iron for proper heat retention. Aside from that, just use the damn burner that your woman doesn’t have stacked full of shit.

Nick, Line Cook and Admin of The Asshole Line Cook on Facebook

For me, the best burner is the bottom left, but that is because I’m a lefty. It’s been my favorite since I started cooking at 7, and I use always use it for my main dish, and all the others for sides. Just feels right that way. I don’t use any other if I don’t have to, even at work I use the left side, and where I work now it’s like the worst burner. But I can’t turn my back on the leftiness.

Dr. Sam Novario, Nuclear Physicist at the University of Tennessee

First of all, not a stupid question. I’d say there’s no difference in the burners on any gas stoves, unless the gas flow is different (which isn’t likely). For electric stoves with big and small burners — at a given voltage, the heating rate is inversely proportional to the resistance of the circuit. If the burners were made uniformly, larger burners would have a higher resistance and dissipate less heat over a larger area. However, smaller burners are made with a larger resistance to compensate, so the heating power per area is basically equal. Does that make any sense.

Conclusion: The best burner in terms of heat transfer depends on the pots being used.

But I’m just armchair physics-ing over here, and the only way to know for sure is to experiment! … Which I did, by the way, and blew a fuse. I was just looking at the resistance, voltage and current as a sanity check. I used wire that was way too small, and they burst like a camera flash. Whoops! 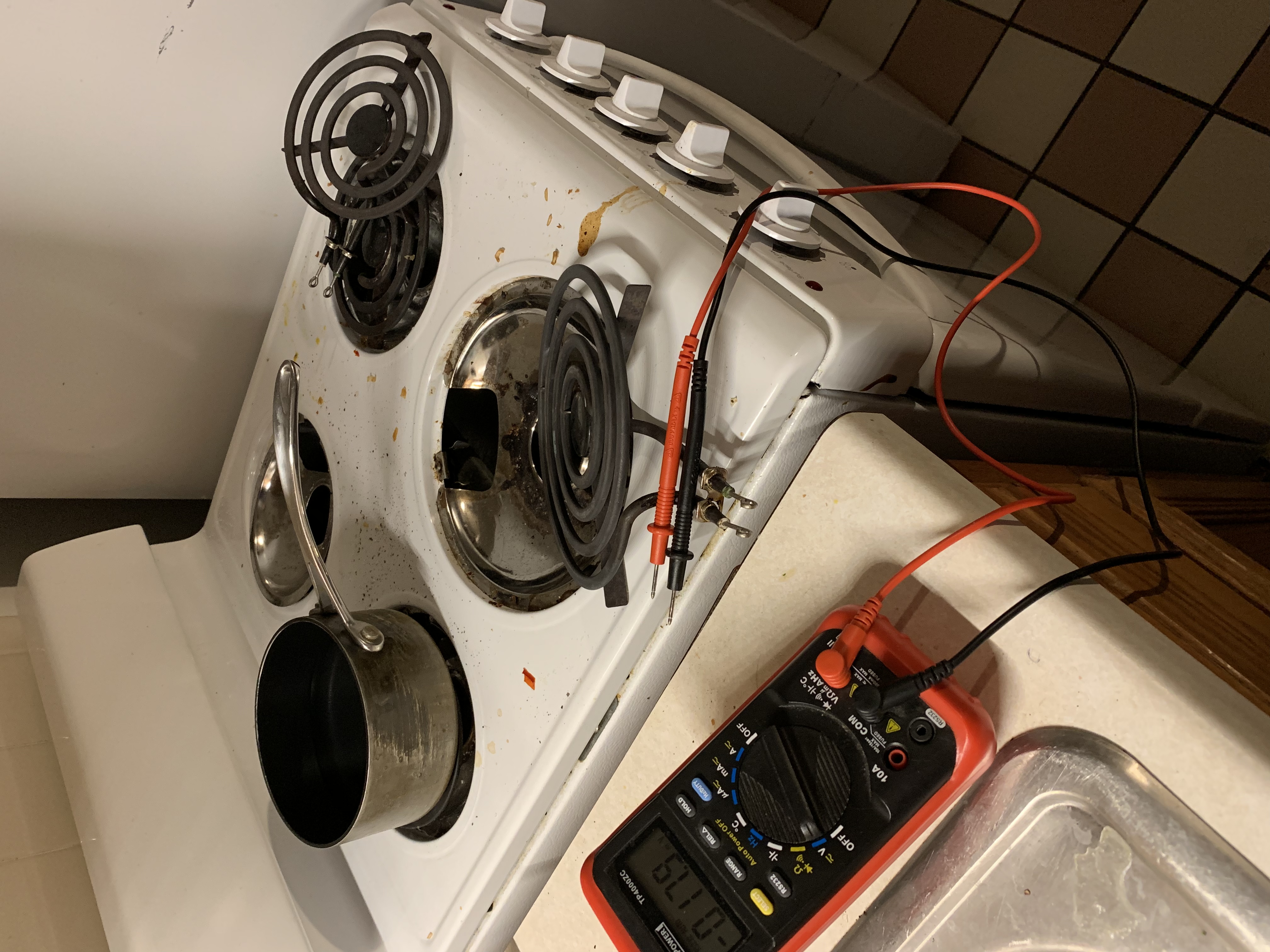 At press time, the stove in my kitchen has yet to respond to questions.