Ranking Near Beers by How ‘Healthy’ They Are

Turns out, non-alcoholic beers have more alcohol than they let on

Before I got sober, I thought non-alcoholic beer was dumb. Now, I feel, well, no different. Why the hell would I slurp pungent hop water if it doesn’t at least help me forget I’m a mere pawn of capitalism?

Hop on the wagon as we take a closer look at non-alcoholic beer and see if we can rank NA beer brands by how “healthy” they are. 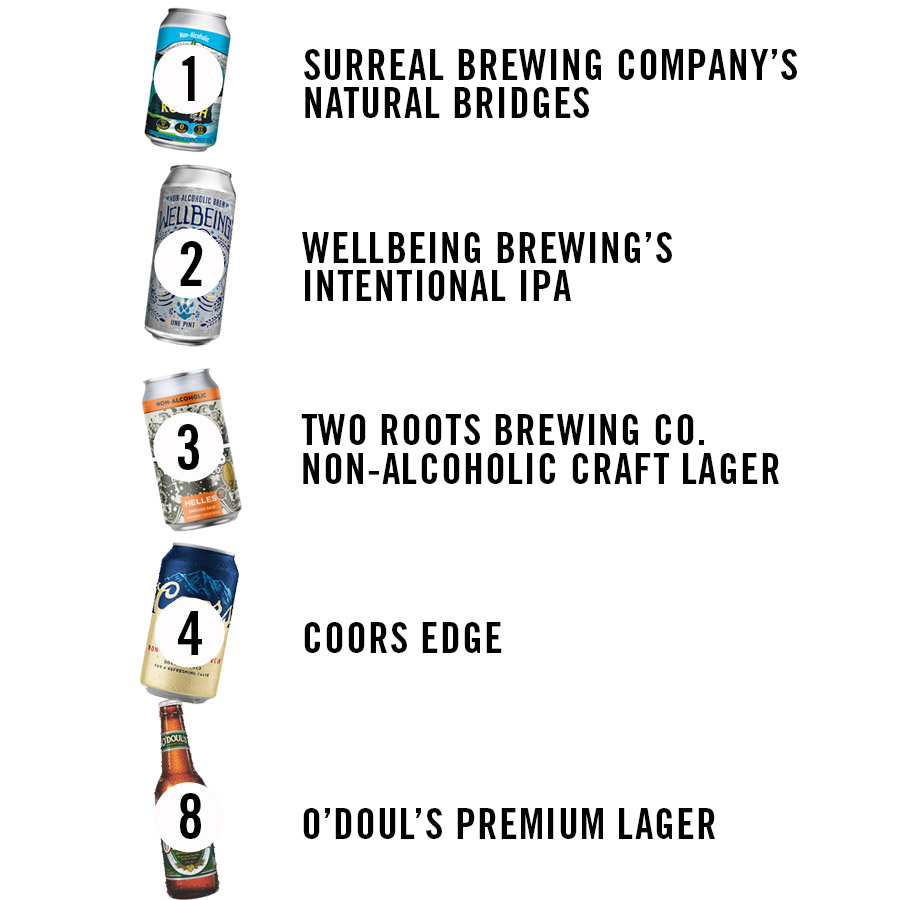 How Is Non-Alcoholic Beer Made?

“Non-alcoholic beers are very difficult to make,” says Nick, the Beer Adviser. “The process is painstaking and requires expensive equipment.”

One of the more popular ways of making non-alcoholic beer is to boil the alcohol out of the beer after it’s been fermented. However, this can dramatically alter the flavor, hence why non-alcoholic beers have a not-so-great reputation among suds snobs (although, that’s beginning to change).

Brewers can also strain the alcohol out of a beer by using advanced filters that only water and alcohol can pass through. Or as Nick puts it, “Some brewers be getting cray with all kinds of molecular filtering processes that will blow your mind.” Liquid and carbon dioxide are then added back to the remaining non-liquid ingredients, and voilà! You have non-alcoholic beer.

The problem is, as Nick explains, “It’s very tough to accomplish making a true non-alcoholic beer,” which could explain why a 2010 study of non-alcoholic beverages found that nearly 30 percent of them concealed more alcohol than declared on the label. In fact, six beers that were labeled as containing no alcohol whatsoever contained it at levels up to 1.8 percent ABV. There are also several studies showing that non-alcoholic beer can still increase your blood alcohol level in rare instances.

The increased popularity of non-alcoholic beer may see improvements in the areas of transparency and brewing technology, but claims about their alcohol content should still be taken with a grain of hops.

Is Non-Alcoholic Beer Good for You?

It certainly contains less alcohol than normal beer, which is a plus for more reasons than just the health of your liver — “Waking up naked and afraid in your front yard is never a good thing,” Nick says.

However, non-alcoholic beers often contain more sugar than their alcoholic counterparts, because brewers need something to improve the taste after boiling the alcohol away. That alone can mean non-alcoholic beers frequently contain almost as many calories and more carbs than regular beers. “It’s healthier than alcoholic beer, but it isn’t that much lower in calories,” says Dana Hunnes, senior dietitian at the Ronald Reagan UCLA Medical Center. “It’s sort of like having a soda without some of the sugar.”

Can You Rank NA Beer Brands by How ‘Healthy’ They Are?

If you want to dive deep into their nutritional values, sure. But just know that most non-alcoholic beers are similar, as Nick explains: “NA beer is made with four simple ingredients: Water, grain, hops and yeast.” (And sometimes sugar, too.)

Nonetheless, let’s rank a few NA beer brands from healthiest to most unhealthy so you can get an idea of what to look out for… (Note, however, that not all alcohol brands, including those who manufacture non-alcoholic drinks, share the full extent of their product’s nutritional breakdowns. So again, take all of this loosely.)

1) Surreal Brewing Company’s Natural Bridges: Containing a shockingly low 17 calories, 2.8 grams of carbs, no sugar and less than 0.5 percent alcohol, Natural Bridges is about as close to water as a non-alcoholic beer gets.

2) WellBeing Brewing’s Intentional IPA: This is the only 16-ounce can on our list of otherwise 12-ouncers, so it has slightly inflated numbers: 129 calories, 17 grams of carbs, no sugar and 0.3 percent ABV. What’s really unique about this non-alcoholic beer is that it contains 4 grams of protein, whereas most other NA beers on our list contain none whatsoever, so it’s more of a well-rounded beverage.

3) Two Roots Brewing Co. Non-Alcoholic Craft Lager: This bad boy has 80 calories, 18 grams of carbs and less than 0.5 percent ABV, all of which is more than many others on this list. But this lager contains no added sugar (at least according to the label), which brings it toward the top.

4) Coors Edge: Coors Edge is super light, boasting only 41 calories, 8 grams of carbs and less than 0.5 percent ABV. However, they do add corn syrup, which is essentially just sugar.

6) Sharp’s: It may have only 58 calories and 12 grams of carbs, but 8 grams of those carbs come from sugar, which I don’t like to see.

7) Beck’s Non-Alcoholic: Beck’s has 60 calories, 13 grams of carbs and an alleged 0 percent ABV. However, they don’t specify how much added sugar is in their beer, something many NA beer brands neglect to mention.

8) O’Doul’s Premium Lager: At only 68 calories, 14 grams of carbs and less than 0.5 percent alcohol, O’Doul’s is chill, but not fantastic. Again, they don’t say how much sugar is in their beer. Plus, Nick specifically calls out O’Doul’s as horrible tasting: “When I was in college, I’d ask the waitress to give an O’Doul’s to my friends no matter what beer they ordered and always laughed at the reaction when they’d take the first drink. So without question, I can promise you O’Doul’s is nasty, and yes, I no longer have any friends.” You’ve been warned.

I could go on — there are tons of NA beer brands out there — but you get the point. Most of all, watch out for those pesky added sugars, and keep in mind that smaller brewers are generally more transparent about their alcohol content (see how WellBeing Brewing is able to say their NA beer has 0.3 ABV). If you have that information, opting for NA beer brands with less alcohol is also always a better choice.

As for me, I’ll stick with my trusty friends water and coffee.