My Chaotic Hunt for the Tastiest Bong Liquid

Mountain Dew? Monster Energy? Chocolate milk? Which will level up my bong rips, and which will disappoint?

Is taking the same old bong rips beginning to feel mundane? Unremarkable? Bland? Well, I have just the proposal for you: Why not swap your boring bong water for something a little more interesting?

There are a couple ways to do this. You could search for manufactured bong water flavorings, which normally consist of food-safe additives, like extracts and herbs, at your local head shop. But these can be hard to come by and a bit pricey for basic processed flavorings.

A more viable option, often explored by curious stoners, is to simply use what you have in your kitchen, or ransack the beverage aisle at your local drugstore, which, in an effort to spice up my smoking experience and determine, once and for all, the best bong water alternatives, is exactly what I did. 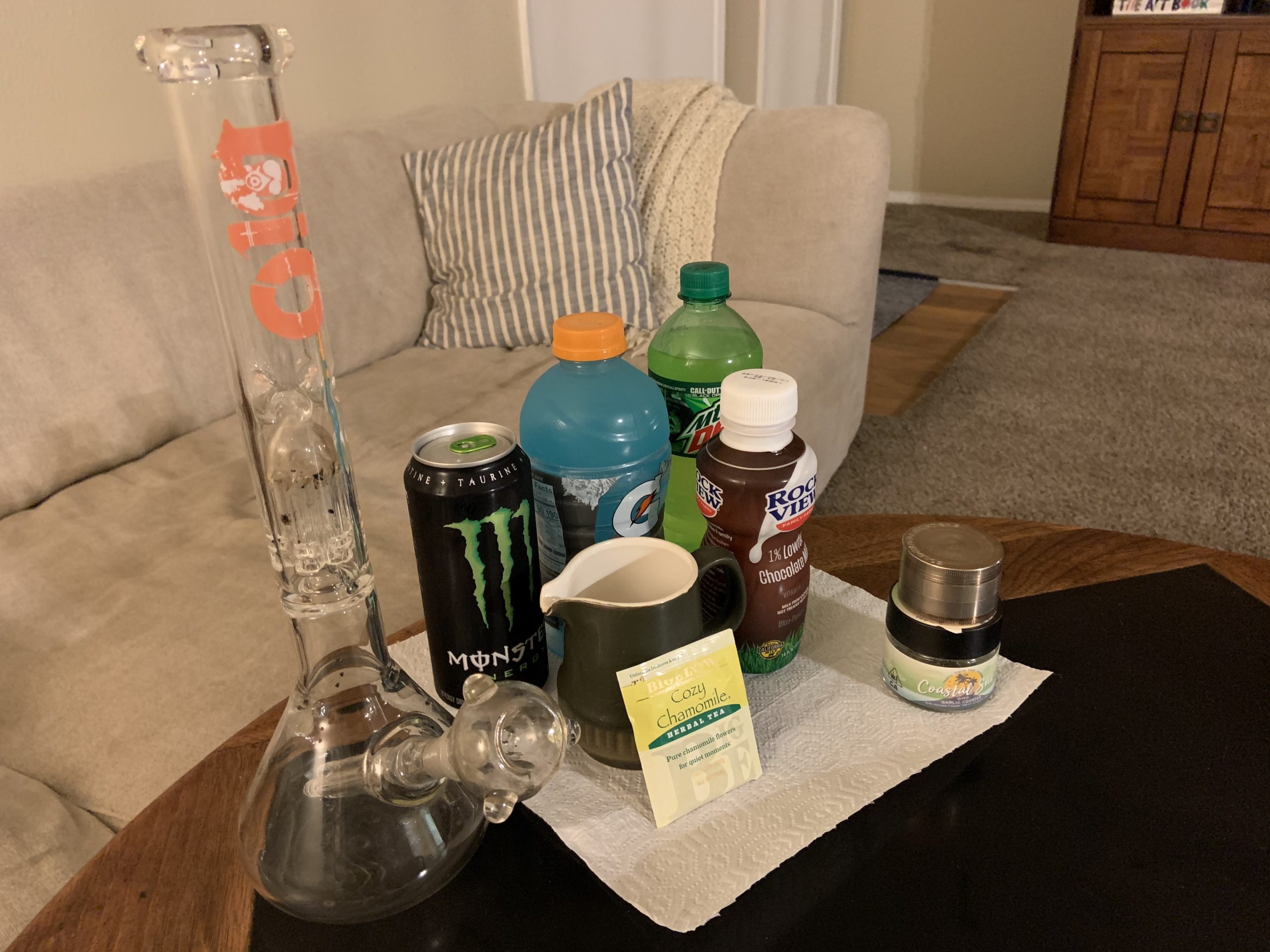 Before I do the Dew in smoke form, I want you to know that I tried really hard to make sure this was safe. I reached out to pulmonologists: No response. I spoke with weed specialists: “We cannot advise you on your experiment, although we’re innately curious about your results.” I contacted Johns Hopkins: “Sorry to say we don’t have anyone available to respond to your request.” I messaged a guy who researches smoking: “I cannot say for sure, and unfortunately, I cannot spare the time to do the research.”

So, either I die or stumble upon something so amazing and profound that even the professionals are left speechless. But realistically speaking, if I can safely drink these beverages, surely I can smoke a little weed through them, right? The average Juul pod probably has worse chemicals, anyway.

The Experience: Chamomile tea is meant to be my gateway into the wild world of bong liquids, hopefully tamer than my other choices, and it kind of succeeds. You get that soothing chamomile taste during the exhale, however I might recommend a more flavorful tea if you really want your bong hit to pack a punch.

The big downside to hot chamomile tea is that it does a terrible job of cooling down the smoke, which shoots into your throat like an herbal fireball. Make sure you have a strong throat game if you try this.

The Experience: A Blue Gatorade bong hit is as smooth as my skin was after doing a marijuana-infused skincare routine. You really do get that invigorating Blue Gatorade aftertaste, albeit a milder version. It reminds me of playing flag football in middle school. Good times.

The Experience: As a bong liquid, Mountain Dew sort of disappoints. It packs less flavor than I expected, like a diluted Dew, the kind of Dew that refrains from shocking your taste buds with sugary radiation. On the upside, the subtle combination of weed and Mountain Dew reminds me of fond memories trying to order while high at Taco Bell, and now I need a Baja Blast.

The Experience: Damn! This is by far the most flavorful bong liquid so far. You get that initial energy drink bite on the inhale, and a strong Monster flavor on the exhale. This is what I imagine every vape juice tastes like, and I feel a strange yearning to do a kickflip right now. Also, my entire apartment smells like Monster, which is kind of amazing.

I should mention that I was a little hesitant to do this one: I was afraid that the cannabinoids and Monster would combine to create a mutant drug or something, but no — just a normal weed high.

The Experience: You really get the creaminess, almost like it thickens the smoke. It feels like inhaling a cloud on the verge of rain, and the milk in the bong bubbles up all funny. However, the chocolate is almost entirely absent. Disappointing.

One quick note about smoking through fatty liquids like milk is that, since THC is fat-soluble, it does have the potential to lose some potency. Did I notice a weaker hit while smoking through milk? I just took five bong rips, so I have no idea where I even am right now. But just know that it could happen.

On the whole, I expected more flavor across the board, but you really only get the aroma of whatever you fill your bong with, except for with Monster — that was some next level shit. It was a fun experiment, but in hindsight, I mostly feel like I wasted five perfectly good drinks, and I have a firmer understanding of why water remains the supreme bong liquid. And hey, I lived.

Now I gotta go clean this bong for 10 hours. Later.