Do You Even Crochet, Bro?

Meet @BennyWillard, the frat guy who's bringing the brochet movement into the mainstream — one super-cute crop top at a time

Throughout high school, Ben, 23, suffered from severe anxiety and depression. He couldn’t focus on anything besides his stress, so his therapist suggested finding a hobby that forced him to take his mind off everything.

The project stuck, and Ben’s anxiety improved. He watched YouTube videos to pick up new techniques, but mostly he experimented. “[I] just started playing around with stuff, trying new things, looking up different stitches and trying to incorporate it into something cool that I could make.” 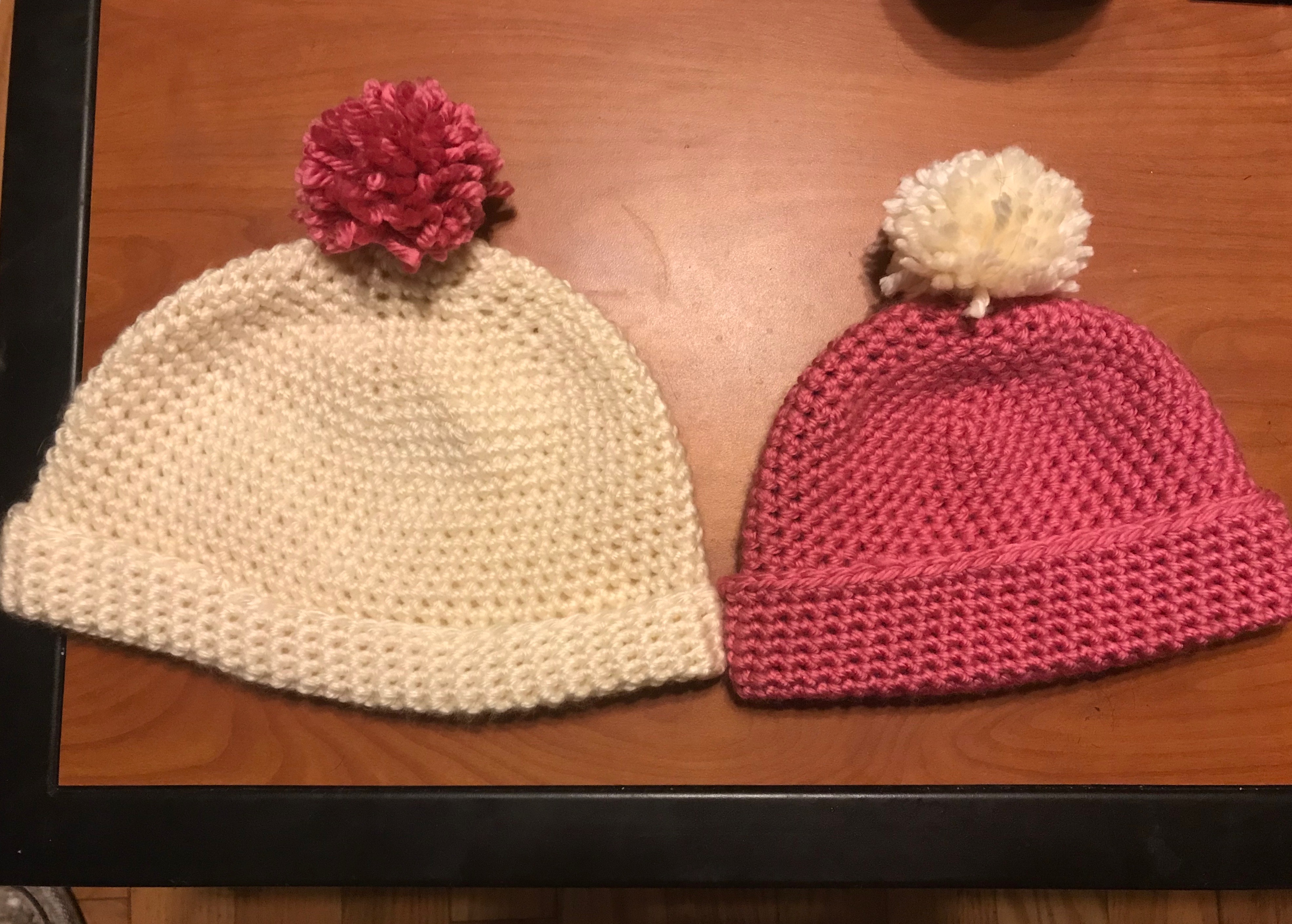 Ben is now an aerospace engineering major at the University of Arizona. He’s had to overcome more mental roadblocks to keep crocheting. “Once school started, I didn’t really do it,” he says. “I’m in a fraternity, and a lot of my friends here are fraternity members. My roommates are in my fraternity. I was always like, ‘I don’t know if I wanna be like at home stitching all this yarn. I might get some flack for it and they might make fun of me a little bit.’”

Finally, Ben decided he just didn’t care. “I’ve been trying to break stigmas and talk about mental health, so I’m usually very open about that now,” he explains. “Just like, whatever, if people want to make fun of me, that’s fine. I’ll figure out who my real friends are.” Ben says he doesn’t hold back on crocheting out in the open or watching TV anymore. He preaches the benefits of a completed crochet to anyone who will listen.

“The best feeling is when you finish something, and you’re just like, ‘Yo, this just started out as, like, a ball of yarn, and now it’s like something really cool that I can wear or use to keep my hand warm when I’m holding a beer.’” 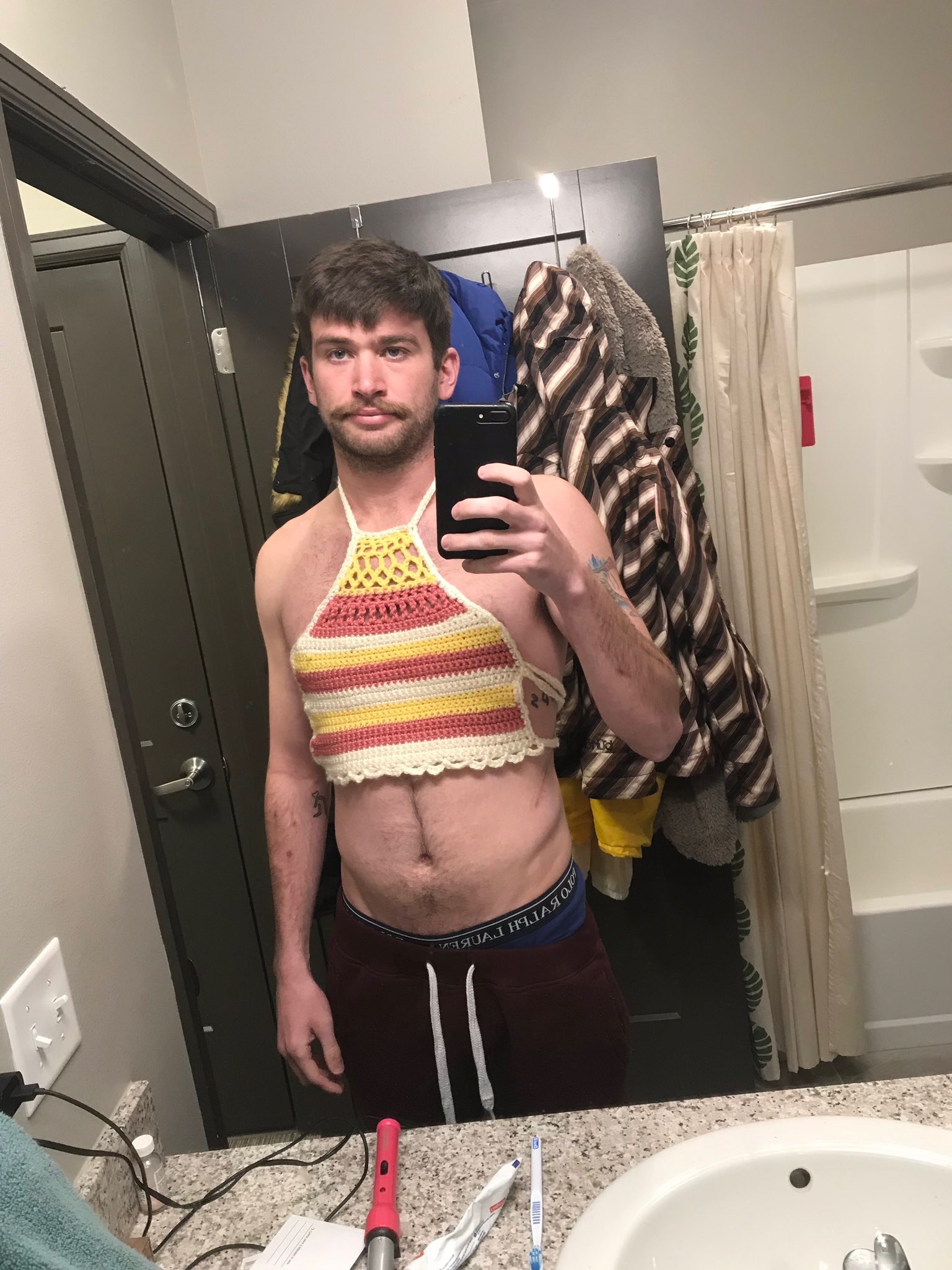 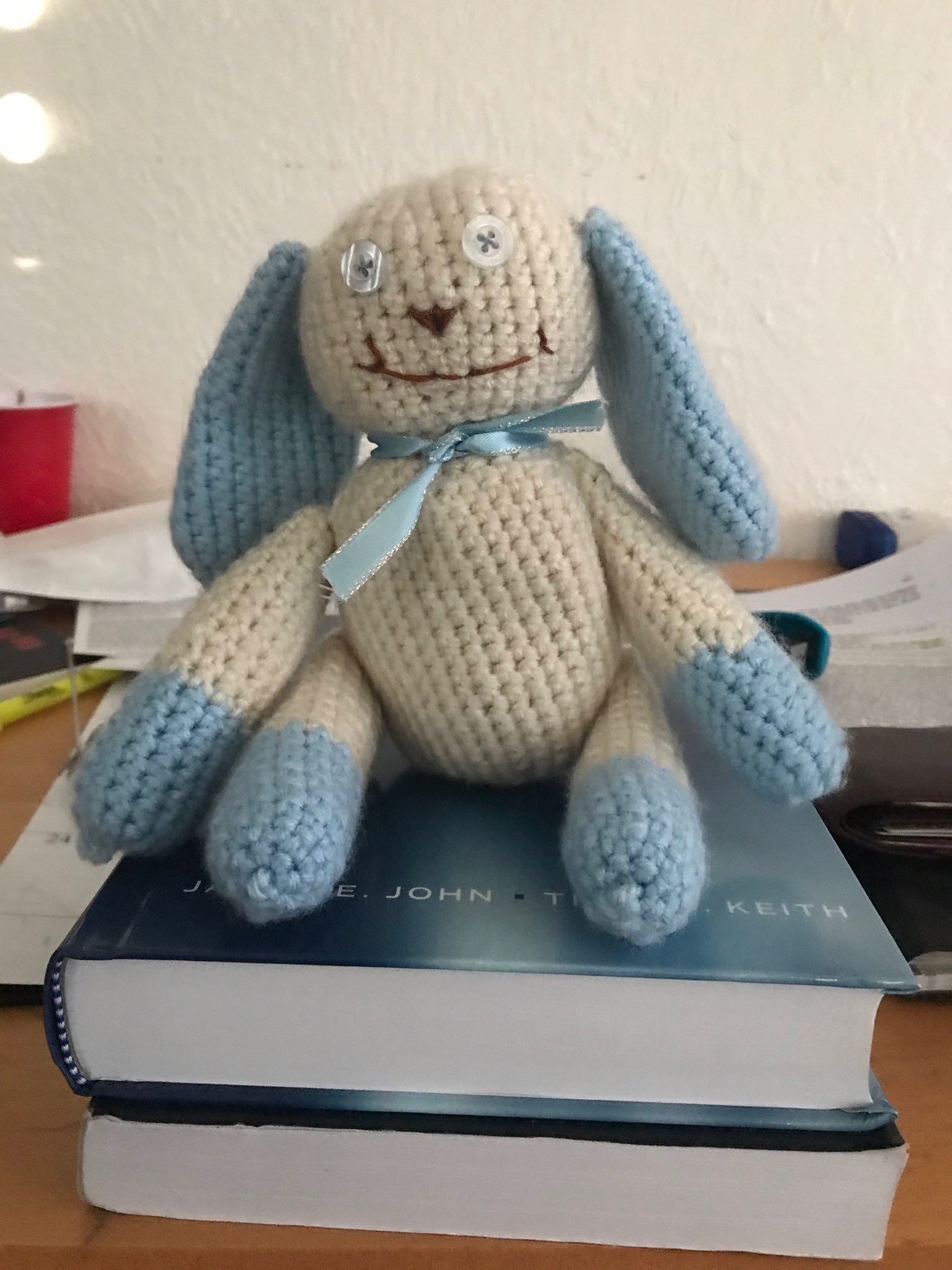 Though taking 20 credits in aerospace engineering takes up a lot of his time during the school year, Ben still finds time to try different things — especially when he’s stuck in Tucson all summer, where things are “so dead.”

“This last summer, I was pretty bored and decided to try something new. I’d been [crocheting] mostly hats because that’s all I knew how to do, and I made this little doll, but I kinda wanted to branch out.”

With tailgate season on the horizon, Ben thought, maybe he could make and sell some crocheted stuff in U. of A. colors. He started with a few Block A coasters and koozies. Then he had a realization: “I figured girls would be the ones to order crocheted stuff, so I looked up some crop-top patterns and made those. I mean, I couldn’t see myself wearing the crochet stuff that I make, but I figured girls might really like that and I could sell a couple for tailgates.”

Aerospace engineering quickly took over his life, and Ben got too busy to crochet crop tops for tailgating college girls. But when he did finally get around to making a top and advertising it on Twitter, the right timing for tailgate season didn’t matter — the tweet went viral.

“I just figured I’d get a couple RTs,” he says. “Honestly, I just thought only a couple of my friends would DM me.”

Instead, Ben’s account @bennywillard (a pseudonym) was flooded with messages, retweets, likes, comments and follows. 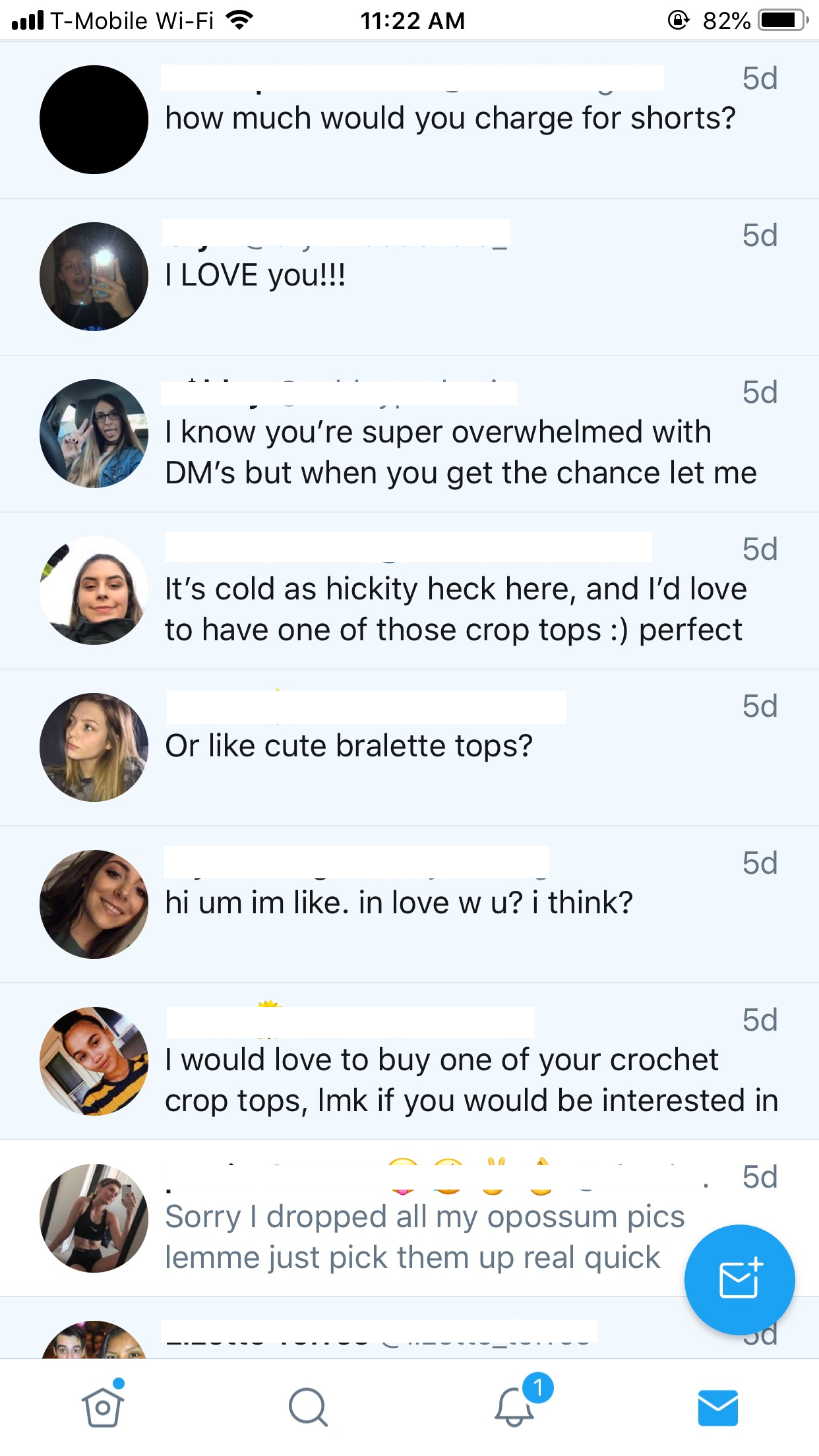 “Half the DMs are girls hitting on me,” he laughs, “but honestly it’s super-stressful.” Ben at first thought all the attention “was pretty cool” and made a point to respond to everyone who messaged him. “Then it just got so, so crazy — right now between Instagram and Twitter I probably have 5,000 DMs.”

Before the viral tweet, Ben says he had around 1,200 followers, but a week after, his account grew to almost 25,000. Unlike past viral tweets he’s had, which have “only gained [him] like 600 followers,” he believes the massive influx of followers is that “people actually wanted to interact with me, they wanted something from me. They wanted to DM me and keep up with what crochet stuff I’m doing.”

Excited by his success, Ben sent a few screenshots to his mom. “I was like, ‘I have hundreds of thousands of favorites and tens of thousands of RTs on this — people really wanna buy my stuff!’ But I don’t think she understands how Twitter works,” he tells MEL. “She was just like, ‘Oh, that’s cool.’”

Ben thinks being a fratty, beer-drinking kind of guy helped him stand out. “I definitely think it was because I’m a guy who crochets, and I was wearing this crop top that I made,” he tells MEL. “It was half-meme, half-serious, so people were RTing it because it’s funny, but also because they wanted to support me.”

Overall, the experience stood out to him because most people were being so positive. “It was great — some people [were] not as nice, but the majority [response] was people being like, ‘This is so cool, what the heck, I wanna get one so bad.’”

Being too busy with school, he was only able to finish one top and ship it out since the tweet. “I’ve been super-busy, so I’ve only managed to finish one commission, and it was the first person who messaged me.” What did the top look like? “It was pretty cool. Like, white, pastel-pink and pastel-yellow crop top. She posted it on Twitter and people liked it.”

Unable to handle the response, he used his moment in Twitter’s spotlight to lift up others who sell their crocheted goods for a living.

“If those people can benefit from this, that’s awesome. But also, I was like, Oh my god, these people can crochet so much better than I can, so I definitely wanted to help those people out. If everyone can get their crochet stuff and everyone’s rocking crochet stuff, that’s super-cool. I want as many people to be able to buy that stuff as much as possible.”

Now that Ben has a solid online personality and platform on Twitter, he says he doesn’t mind being known as the “Crochet Guy.”

“I’ve always wanted to be a big Twitter personality, and get all kinds of followers and stuff, and though I wasn’t expecting to be known as the Crochet Guy, I think it’s super-cool. I get to show off my creations and my hobby and help destigmatize mental health while doing it.”

Ben adds that a crochet-centric YouTube channel or podcast might be in his future. “People sound really interested, not only with my crochet stuff. They’ve gone back through my tweets and think my life is kind of interesting… which I don’t really think it is, but on Twitter it seems more like it is.”

After our interview, Ben follows up in a text: “Also I got drunk last night and thought it would be funny to make this lol. Not sure if you can use it or not, just thought it’d be funny.” 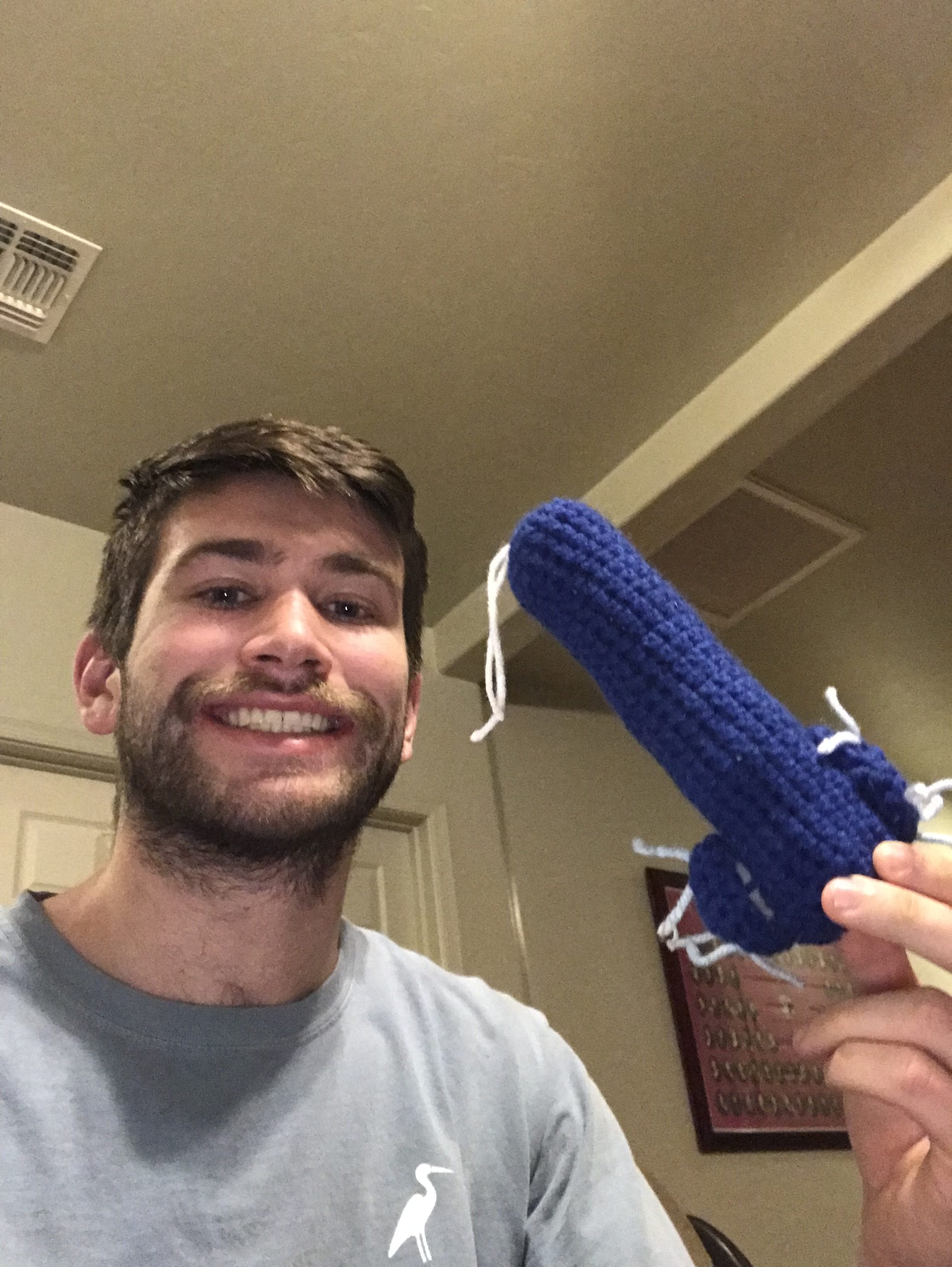