Do Barbers Really Cry When They Watch ‘Edward Scissorhands’?

And, while we’re at it, what do topiary artists, ice sculptors and dog groomers think of the character’s skills?

In the 72nd episode of Seinfeld, Kramer is getting a shave in a barbershop and, suddenly, an argument about Edward Scissorhands breaks out between the barbers.

Gino: So I love that Edward Scissorhands. That’s the best movie I ever seen.

Gino: Hey, it’s a beautiful dream. I’d love to be this man!

Later on, we find ourselves at Gino’s apartment, when Enzo comes over and apologizes for disrespecting the film, saying that he rented it and that it had brought him to tears.

So, naturally, my question is, do barbers really have such a profound connection to Edward Scissorhands? What do they think of Edward’s skills as a barber? How do they feel about his unique hairdo? And do barbers really dream of having scissors for hands?

These questions might seem strange, but the only real way to know the answers is to ask some barbers and see what they say (and hope that, if the movie does make them cry, they’ll be in touch with their feelings enough to admit it). And, while I was at it, I also wanted to ask some other scissor-oriented professionals about the movie. After all, Edward doesn’t just show proficiency as a barber — he’s also a spectacular dog groomer, topiary artist and even ice sculptor. So, here’s what all of those professions think of Edward Scissorhands. Because I can’t be the only one wondering about this stuff, right?

Paul Miller, ice sculptor and owner of Stellar Ice in Dallas: That’s not real ice in Edward Scissorhands, that’s just clear acrylic. You can tell because the piece he’s making is just too big — they don’t make blocks of ice that big. To get something that big, you’d have to glue blocks together, and there are no fuse lines in that sculpture.

On Using Scissors to Sculpt Ice

Miller: You’re probably going to do more damage than beauty with scissors. When you’re trying to cut through a big piece of ice, a knife just isn’t going to do it — you can’t cut through that without damaging something, either the blade or the ice. Also, one of the reasons why we use chainsaws is because they’re spinning — they’re taking ice and pulling it out of the way while another link of the chain grabs some more. So chainsaws are much more precise when it comes to ice. A blade can scoop and finetune at the end maybe, but chisels are better for that. You’re just not going to be able to pull off a nice sculpture with a pair of scissors.

Stefan Przystanski of Topiary Art Works & Greenhouses: I’m not interested in talking about Edward Scissorhands. The topiaries in that movie are fake topiaries, and I know who made them. I would be ashamed of this type of work.

Jennifer Coburn of Coburn Topiary and Sculpture: I just happen to have the original topiary serpent frame that was used in the movie! Originally, my company was to create the topiaries for the movie as the location to shoot was going to be in Arcadia, California. The mayor wouldn’t give them a permit to shoot at night in the high end neighborhood so they took the other location in Florida.

Another company that I know outsourced the frames to be created and they were then covered with faux plant material. The topiaries were auctioned off after the movie. I happened to stumble upon the serpent while I was making Duff Beer bottle topiaries for Universal Studios. An ivy grower that I purchased some plants from had it way back in the yard looking sad, as all the faux material had rotted away, so I made them an offer they couldn’t refuse! I just placed a skeleton riding on its head for Halloween! 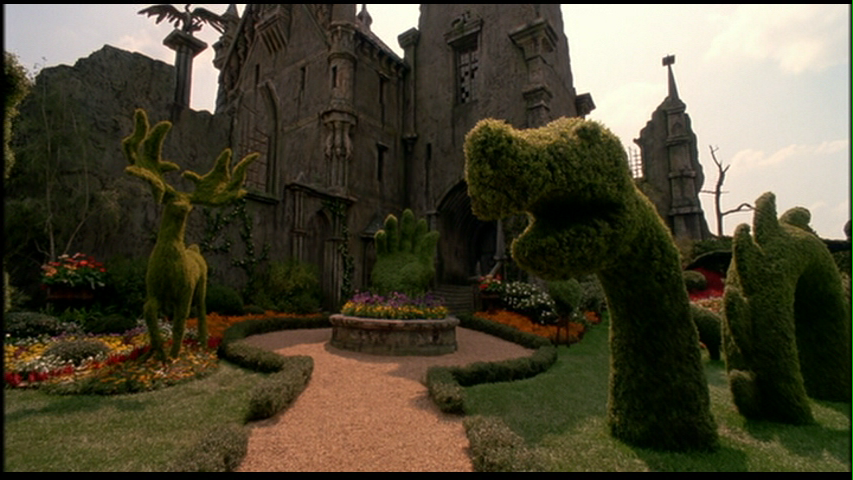 As for Edward Scissorhands, he’s a great fantasy topiary artist, but in the real world, plants don’t exactly carve up into shape in the way Edward wildly clips. Trimming topiary is kind of like bonsai, where you’re studying growth habits, branching propensities and judging where best to trim to encourage new growth to form.

Also, I could see having one scissorhand, but you need fingers for guiding and directing the branching where you’ll need it most!

On If Having Actual Scissorhands Would Make Dog Grooming Easier

Mitchell: Yes! I’d cut a lot faster. Though I’d be scared to death that I’d cut the dog.

And now, most importantly, the barbers…

Andy the Barber, owner of Andy’s Barber Shop NYC in Valley Stream, New York: It’s an okay movie. It’s a classic, but it’s not the best movie I’ve ever seen. I like Bad Boys II.

Trav Taperz, owner of Taperz Barber Lounge in Middletown, New York: Uh, I tried to watch that movie, but it was rough. It was like The Grinch. I probably would have liked it if I watched it 20 years ago, but it was absolutely not the best movie I’ve ever seen.

On Edward’s Skills as a Barber

Taperz: He’d be a great mall barber, but he wouldn’t make it in a shop like mine.

Taperz: I loved it. Whoever his barber is has great taste.

On If Having Scissors for Hands Would be a Beautiful Dream

Taperz: Nah, man. He was dicing everything up, cutting open the door knobs. He was a hell of a landscaper, but nah man. I’m good. I’d like to keep my man balls.

On If the Movie Made Them Cry

Taperz: I only was crying because it was so dreadful to watch.