Ten years ago, a dumb viral hoax heralded an age of internet clownery

It was, you may recall, an age steeped in reality TV. Earlier that year, NBC aired the eighth season of The Apprentice, which by then had celebrity contestants including Dennis Rodman and Joan Rivers (she won, duh). The host, Donald Trump, joined Twitter in March 2009, the same month this season premiered; although the social platform was rapidly growing, his self-promotional content attracted no particular notice.

In the meantime, an eccentric storm-chaser and inventor named Richard Heene was charting his own career in television. Also that March, ABC aired the 100th episode of the reality show Wife Swap, featuring Heene and his wife Mayumi. The couple had been welcomed back as fan favorites after a 2008 appearance: “Mom Mayumi is devoted to helping her fringe scientist and inventor husband Richard build a flying saucer and hunt for UFOs as they hope to find evidence to support their belief that all humans are descended from aliens,” the narration declared. Always involved in the couple’s projects were their three sons, Bradford, Ryo and the youngest, Falcon, who, on that fateful October day, became… Balloon Boy. 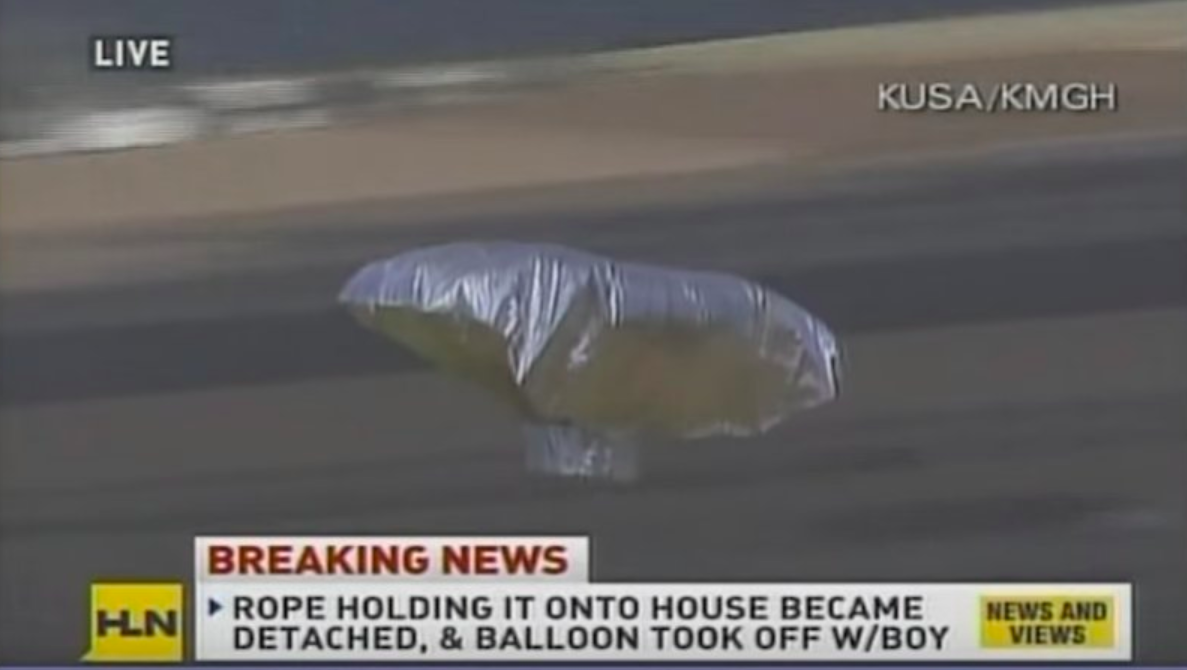 The story Richard and Mayumi fed to a local news affiliate (and then emergency responders) was that their homemade aircraft had come untethered, possibly with Falcon inside, as they could not find the 6-year-old, and one of his brothers had seen him climb aboard. When the balloon touched down and proved empty — Falcon had been holed up in the attic of the family’s home all day — an apparent hoax began to unravel.

But in the interim, there was wall-to-wall live media coverage. Untold hours of productivity were lost as office work ground to a halt so people could follow this drama as it unfolded. The incident was a proving ground for Twitter as an infinite, up-to-the-millisecond reel of baseless speculation, hack jokes and viral rumors. When it seemed that a dark shape fell from the balloon, observers analyzed the footage frame by frame, as though it were the Zapruder film.

This was also, perhaps, the first time we encountered the kind of utterly addictive, instantly disposable narrative that propels online discourse from day to day in 2019. Amazingly, on that afternoon, some wags were still referencing how Kanye West had interrupted Taylor Swift at the VMAs, which had happened an entire month before. Just try to remember, now, what the pop news cycle was four weeks ago.

In retrospect, the Balloon Boy saga bore the hallmarks of the bullshit that has consumed digital culture ever since. You had lightning-fast monetization in the form commemorative T-shirts, the half-baked parody accounts and amused commentators, who were scolded by those genuinely worried for the kid’s safety, who were in turn mocked by those deducing that the flimsy contraption floating through the atmosphere couldn’t carry the weight of a human, even a small one.

Through it all, however, anchors and bloggers alike hardly questioned the fact that Falcon was in the foil-wrapped saucer, accepting this as the reason for their breathless updates — otherwise, they were reporting on an errant toy that had prompted the rerouting of a few planes in the area. For social media, this unwavering focus translated into an enduring rule: one is not allowed to avoid the topic of the moment, nor to withhold one’s take on it. You were expected to say something about Balloon Boy, even though there was nothing of value to be said.

Revisiting these tweets is like returning to a fork in the road where we first chose something that “broke the internet” over reason and coherence. Why would Souplantation, a California-based salad bar franchise, post their concern for a child in unconfirmed peril? How did a bunch of wannabe comedians decide, en masse, to use Falcon being found in an attic as an opportunity for Anne Frank one-liners, actually causing the Holocaust victim’s name to trend?

Our intensely dumb response to this publicity stunt was outstripped only by its evident architect, Richard Heene, who got 90 days in jail and heavy fines for lying to authorities. Naturally, he was a peddler of junk science obsessed with reality TV fame and landing his own show; of course he would later conscript his sons into what he called “the world’s youngest heavy metal band” and have them shoot a video supporting Donald Trump for president.

It is almost too apt an endorsement — an attention-seeking narcissist likes the exemplar of the type — and confirmation of what occurred in 2009: Just as the Heenes saw their stunt spiral out of control, having failed to account for the wildfire momentum of internet phenomena, our future commander-in-chief was discovering the potential of this new territory beyond the broadcasting world the family sought to enter. For an instant, these two modes of communication were crossed, and the one Richard Heene favored was in decline; Trump’s reputation as a businessman was salvaged by The Apprentice, but it was his online presence that carried him into the election. Really, the flight of Balloon Boy was an accidental, overwhelming success on the wrong terms, demonstrating how far and fast America would run with nothing much at all.

These days, with Trump tweeting madly through an impeachment inquiry, you might view the content of October 15, 2009, as quaint, if rather silly. Or you could see it as the start of an ongoing, all-pervading failure to react skeptically and proportionally to what turns up on our personal screens. It was “Fake News” before we had the phrase, a literal object lesson, the commandeering of eyeballs by unchecked inference.

Pity we didn’t stop for a long, slow blink.