Another bracket of the ‘all-time’ worst posts has people arguing that some are, in fact, quite good

If you’re old enough, you might remember an air of skepticism surrounding the early days of Twitter. What are you supposed to do with a “microblogging” service that cuts off any text beyond a scant 180 characters? Tell the world what you’re having for lunch? Who cares.

Three presidential administrations later, this attitude is extinct. We know how powerful a megaphone Twitter can be, and how a single post from a specific person can upend global markets, trigger a legal investigation or destroy a reputation. We have also come to observe the impact of singularly awful tweets, even — or perhaps especially — from unknown individuals with almost no audience. Your relationship with the platform may vary, but odds are, if you’ve been there a while, you’ve become a steward and a scholar of these artifacts, the most legendary of which are like precious heirlooms, evidence of a shitposting culture at its peak.

That is to say, we like bad tweets. If pain exists so that we may know pleasure in comparison, then bad tweets are essential to the recognition of good ones. Why else would some intrepid user periodically attempt to create a tournament bracket to determine the worst of the worst? It can only be that we love to revisit our favorites — to cringe and shake our heads all over again.

In day-to-day discourse, we can analyze the bad tweets on their own merits. However, something interesting happens when a person (in this case, TV writer, producer and podcaster Mike Benner) sits down and picks 64 of the “all-time” stinkers. Taste being subjective, disagreement is to be expected; political and personal affiliations will temper your opinions, and, after all, we’re supposed to be arguing over which post in any matchup deserves greater scorn. But there’s a deeper friction at play here. As the extremely online will insist, several of the “bad” tweets are in fact rather good, and a few are even great. They achieve, shall we say, artistry.

Before we get into the “bad” posts that are actually fantastic, let’s break down a tweet that I think most would agree is indeed a foul stain on the website and the minds of all who remember it. A number one seed in Benner’s bracket, it dates back to September 2020, when Supreme Court Justice Ruth Bader Ginsburg passed away, some weeks after the actor Chadwick Boseman had. This inspired the usual glut of weird fantasies where recently departed celebrities and public figures meet up in heaven, yet none could match the sheer discomfort of “Ruthkanda.”

There are several elements that, taken together, make this such a compelling catastrophe. First, it is excruciatingly earnest: You can feel the sweat it took to craft these sentences, and the moral weight the author wants them to have. Second, it’s a prime example of “woke toddler” syndrome — wherein a parent tells us their precocious child said something they almost certainly did not — shared years after we all agreed this stuff was embarrassing and phony. On top of this, we have the miserable attempt to shoehorn one recent headline death into another by way of a Marvel movie, as if mere timing means they have anything to do with one another. The unnecessary use of hashtags communicates a thirst for clout in the midst of national grief, and specifically turning the aesthetic trainwreck “Ruthkanda” into a tag is a sign of hoping that the portmanteau goes viral. The whole thing reeks of cynicism that doesn’t even recognize itself. 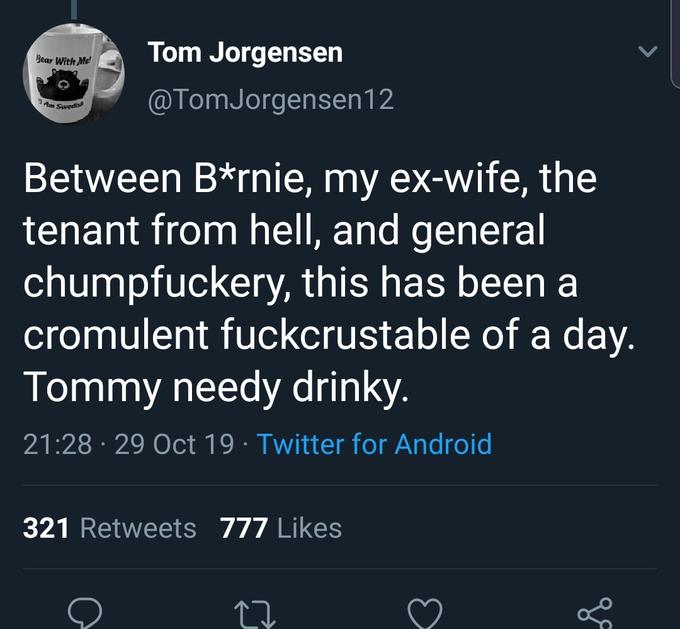 Just to lay out my own biases: I love this tweet. As I read through Benner’s 64 selections, the great majority of them familiar, it was the only one I burst out laughing at all over again. Unlike the Ruthkanda tweet, there are no obvious precedents for it. And Tommy has no desire but to blow off steam in language florid enough to express his frustration. His intent is pure. Yes, I’m naturally amused at the thought of a divorced, Bernie Sanders-hating landlord having a terrible day, though I also admire the wasted effort of elevating the complaint to prose that scans like James Joyce fed through a Joss Whedon filter. Censoring “Bernie” so the socialists won’t stumble across the post is a delicious opening detail (since they did anyway), and the abrupt, self-infantilizing conclusion “Tommy needy drinky” is a twist worthy of Hitchcock. I do not sense a part of my soul withering away to ash when I look at this post. I experience… well… joy.

Here’s another instructive pairing, centered around national days of mourning, which always bring out the best and worst of Twitter. On the left, you have SpaghettiOs trying to advertise with a remembrance of Pearl Harbor. It’s so ill-considered, so fantastically dissonant, that you can’t help but admire it and imagine the corporate bungling by which it came to exist. It’s outrageously funny in a way that a brand trying to be funny never is. On the right, though, is former MLB player Lenny Dykstra, who has been accused of sexual assault, announcing on September 10, 2019, that it was the last night as “jailbait” for anyone born on 9/11, and sharing a U.S. map that shows the age of consent in each state. This, my friends, is a truly bad tweet, vile for its own sake and verging on a confession of despicable acts. It cannot be redeemed.

There are more abstruse debates to be had. Some believe that people doing bad tweets on purpose, as a “bit,” do not belong in contention for the worst tweet ever. The current bracket includes entries from Don Hughes and Stefan Heck, and both are evident parodies of particular tweeting styles, and an infamous tweet excusing deadbeat fathers if their child “has bad vibes” is widely understood to be a joke. Another sentiment holds that bad tweets should stand on their own: the saga of “Bean Dad” must be appreciated as a smug, lengthy, bloviating thread followed by an extended meltdown in defense of it, and no single installment captures that magic.

Meanwhile, some of the supposedly bad tweets here are obviously wonderful — like the one where the official account of the band Smash Mouth replies “good dude!!!!” to a guy who tells them he gave his girlfriend head while their song “All Star” was playing. As far as my personal preferences go, I regard Ben Shapiro’s pedantic style as too intellectually vacuous and dull to qualify (even if he did reveal he can’t arouse his wife), while Richard Dawkins’ seething rage at being made to throw out a jar of honey at the airport is hysterical, almost divine. It would be a mistake to regard a tweet as historically bad because you dislike whoever wrote it, or enjoy dunking on them.

No, what I find unites actually bad tweets is a combination of ignorance, sincerity and an absolute confidence in your dumbass ideas and entirely wrong assertions. It’s Dr. Naomi Wolf spreading disinformation about 5G technology and, in the same breath, claiming that Belfast, the capital of Northern Ireland, was “calm” and “peaceful” in the 1970s. It’s the FBI celebrating “the life and work” of Martin Luther King, Jr., a man whose downfall they yearned for in his lifetime. It’s a professional YouTuber like Logan Paul trying to make flying first class while blond seem profound, and Geraldo Rivera speculating that Barron Trump will be America’s next heartthrob, and some guy saying that if Hitler were alive and carrying out genocide today, “praying for him to grow and change” would be the best response.

Of course, nobody can tell you which tweets to hate and which to adore for their awful glory. Badness, like beauty, is in the eye of the beholder. Twitter wouldn’t hold our attention if it didn’t allow for discourse on the fine line between stupidity and genius. What matters is that a social network once thought to have little promise has brought our collective derangement into full flower. No bad tweet would be possible without millions of us churning out comment after comment until one anointed individual hits upon the exact permutation of error that leaves the rest of us speechless.

Oh, and don’t forget the most important lesson: Next time, it could be you.