Eat Your Heart Out: Backyard Brisket

‘The more I cooked it, the more it made sense. I began seeing it was more than science; it was an artform. I learned the feel of barbecue.’

Harry Soo is a pitmaster and barbecue grand champion who stumbled into the discipline after moving to the U.S. from Malaysia. He was the winner of the first season of TLC’s Barbecue Pitmasters reality show, and currently caters and teaches BBQ classes in Southern California. He’s the sixth in a series of men we’ve interviewed about the dishes that — either through nostalgia or comfort — fill the soul.

I first came to America 40 years ago, and I made one of my most important culinary discoveries during my first week at Texas Tech in 1983.

I guess you could say I was a refugee of the oil crisis. Older people like me remember having to stand in long lines in the 1970s to buy rationed gas because of the crisis. Worse yet, it resulted in me losing my job flying 747s for Singapore Airlines.

Of course, in your early 20s, you think you have the world in the palm of your hand, but getting laid off made me realize I was nothing more than a sock on the side of the road to the company. I did some research, though, and I started learning about this thing that was emerging as a big phenomenon around the world — the computer. And of all the schools I applied to, Texas Tech had a generous assistance program for international students.

Still, I knew once I got there that I needed a job. So I started working in the athletic cafeteria at school, scrubbing trash cans at first, then scrubbing pans, before getting promoted to official dishwasher within a few weeks. I wrote a letter back to my folks: Whoo hoo, your son is washing dishes in America, making it big! But on the job, I met a coworker who was a proud Texan and took it upon himself to show me real barbecue. I tasted my first-ever brisket and beef short rib that day. And I was smitten.

My first thought was, “Why haven’t I ever seen low-and-slow barbecue before?” I was so curious that it led me to try and reverse-engineer that brisket over the next 20 years. In computer science, there’s something called a brute-force attack. That’s basically what I did with barbecue. Imagine having to open a lock with three digits, so you start with 0-0-0, then 0-0-1, then 0-0-2 and so on. I did that with my recipes. I’d use a rub with just salt and pepper, then salt and pepper and chili powder, then sugar, then garlic powder. Same for the cooking techniques. I’d chart all the results into VisiCalc, the grandfather of Microsoft Excel. I didn’t have a pa or grandpa to teach me. So I took an approach I knew would work.

My first 10 briskets were inedible. I just didn’t understand the science of wood fire and protein. But the more I cooked, the more it made sense. I began seeing it was more than science; it was an artform. I learned the feel of barbecue.

When I moved to Pomona, California, I kept cooking barbecue but didn’t make much of it. In 2008, though, when I was working as an IT manager in L.A., a project manager of mine came into a meeting inspired by the movie The Bucket List. “We’re a bunch of IT nerds, Harry,” she told me. “We should do something with our life before we kick the bucket.” So she had us all sit down at the start of our meeting and write down some bucket-list items. We were commenting on each other, what we were good at. They all ended up challenging me to enter a barbecue competition.

I showed up at one in Palm Springs that year, just thinking it’s for fun. I didn’t even have a team name. A co-worker joked that, in the South, something truly delicious is considered “slap somebody” good. So they came up with “Slap Yo’ Daddy Barbecue,” which I thought was just… totally stupid. I put it down on the form to humor them, since I wouldn’t ever use the name again. Then, well, I won the competition.

You know, a lot of members of the public still don’t know that I’m the pitmaster at events and things. If they see a Chinese guy, the impression is, well, he can’t be the cook. I used to mess with people who came up to me asking for the pitmaster. I’ll tell ‘em that he went to the bathroom, and just keep repeating that he’s stuck in the bathroom until they finally Google the name (laughs). I remember doing competitions in Kansas City, and being the only Asian guy in a field of 400 or 500 competitors.

I am, in fairness, an accidental pitmaster, and the last 10 years have been a privilege, getting to travel and teach around the world. I’m really paying homage to a tradition that’s uniquely American.

I believe in life, when you’re between age 20 and 40, your role is to learn from as many masters as you can. From 40 to 60, you should hone your craft. And after that, where I’m at, your job is to give away everything you learned. As such, I publish all my secrets now. I want to pass on that knowledge, and it all came from some Texas brisket I ate in college. 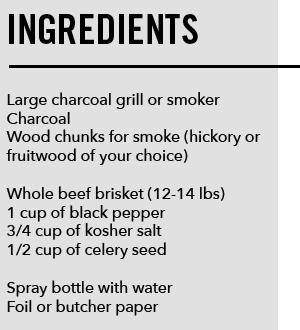 To make “Harry’s Basic Backyard Brisket” yourself, start by combining the salt, pepper and celery seed in a bowl and mixing thoroughly. Then, unwrap your brisket and place it on a cutting board, fat-side up. Use paper towels to wipe moisture off the brisket on all sides. Then take a sharp knife and begin trimming the brisket on the fat side, shaving off any large chunks and aiming for a nice 1/4 inch of white across the cap. Flip the brisket and trim again, looking for any odd chunks and tough membrane.

Put the brisket fat-side-down into a tray, and generously sprinkle with the rub, making sure the entire surface is covered in a coat of seasoning. Set aside while you prep the grill.

Place the wood chunks into the bottom of your grill, then surround them with high-quality charcoal (think lump hardwood charcoal, not discount briquettes). Using a chimney, ignite a load of charcoal and spread it on top of the pile already in the grill. Put down your grate and wait for the temperature to hold at 400 degrees. At that point, put your brisket fat-side down onto the grill.

The key over the four-hour cook is to maintain a 350- to 400-degree fire by controlling the top and bottom vents of the grill. Too hot? Close down the top vent, then adjust the bottom. Too cold? Make sure max air is flowing through both ports. After two hours, open up the grill and use a spray bottle of water to moisten the entire brisket — this helps the “bark” develop. Repeat again 30 minutes later.

After three hours, take the brisket off the coals and finish cooking in an oven set to 275 degrees. As the oven preheats, you have to wrap the brisket, using either two layers of butcher paper or foil. Make sure the material is long enough to fold back over the meat, and roll in the sides to crimp the open edges shut. Cook for another hour and begin testing for doneness with a skewer. It should slide in with a little resistance; Soo says it feels like poking the skewer into a jar of peanut butter.

Let the brisket rest until it cools off a bit, and then cut into 1/4-inch slices, making sure to cut against the grain (you’ll notice the difference between the lean “flat” and fatty “point” parts of the brisket). Serve and admire your work.