Who Put a Hit Out on Azul the Peacock?

McKinleyville, California is a small town in the northern half of the Golden State, population roughly 15,000. It’s a place where most of the ugliness of the outside world is kept to a minimum, which is why no one in McKinleyville ever expected that their hometown would ever be the site of a contract killing — let alone, the planned murder of Azul the Peacock (aka Mr. P.), the town’s beloved mascot.

The hit was ordered via a Craigslist ad from June. “The job is simple… get rid of a wild peacock that is disrupting our lives — by any means necessary,” it read. “Contact me so we can form a strategy to eliminate this bird, and also to agree on how much you will be compensated.”

Azul was gunned down days later. 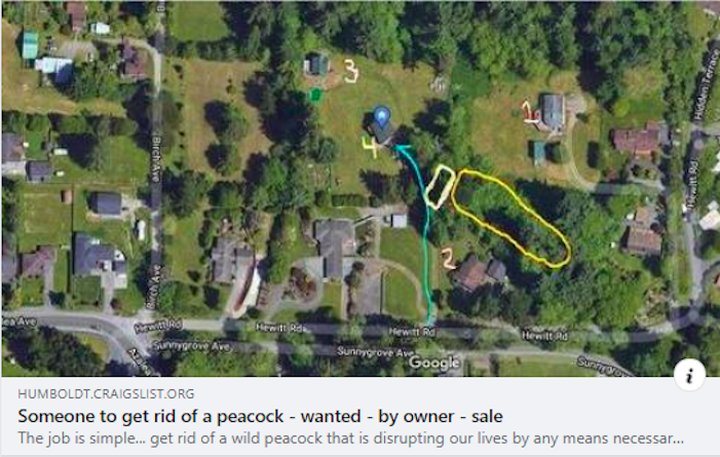 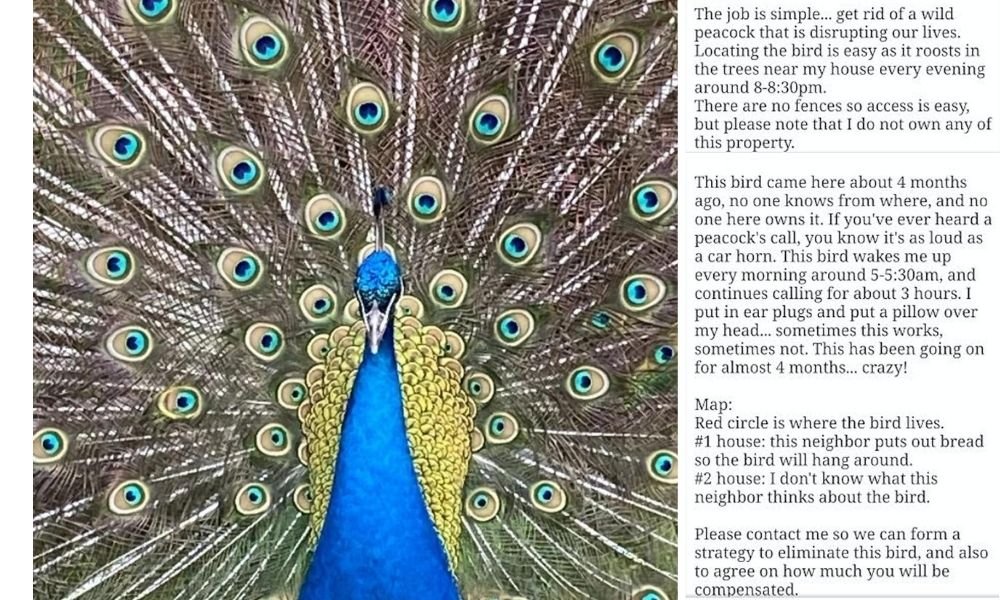 He had arrived in McKinleyville roughly six years prior. As Melissa Glass told the L.A. Times, “He literally showed up out of the blue one day.” And ever since that fateful day, “He’s just been part of our life.” In fact, her husband, Mike, told the area blog LocalCoastOutpost, “He taps on our sliding glass window. We give him bread.” “He comes for the company, but stays for extra treats,” Melissa added.

The Glass family keeps chickens, which Azul liked to socialize with, but Melissa says the bird was also quite good at socializing with people, too. “Even the UPS guys would stop and take pictures,” she told the L.A. Times. She went on to explain that Azul would hit up her neighbors for cookies and bites of French bread: “He was working the scene. He knew he was charming.”

Then, tragically, on June 30th, Meredith, a neighbor of Glasses, showed up to the Glass home distraught. She had discovered Azul’s lifeless, brightly-colored body in her backyard. Mike Glass was the one who made the solemn trip to Meredith’s backyard to confirm their worst fears. Azul the Peacock was dead, felled by a single .22 round. “The bird just bled out slowly for a couple hours,” Mike recalled to the Outpost.

As word of Azul’s death spread through McKinleyville, there was shock, anger and outrage. What could a peacock do to deserve such a violent end?

Some residents demanded justice. A petition (currently with nearly 32,000 signatures) was put forward calling on the Sheriff’s Department to investigate and bring the bird killer to justice. The language of the petition, which was posted on LadyFreeThinker.org, is specific in its demands: “The Humboldt County Sheriff’s Office is currently investigating the case. If found, the persons responsible could be charged with conspiracy to commit a crime and animal cruelty. Sign this petition urging the Humboldt County Sheriff’s Office to not take this case lightly, and use all available resources to find Azul’s killer and the person responsible for the Craigslist ad that may have led to his death.”

To their credit, the Sheriff’s Department has informed interested media that “a potential suspect has been identified by deputies.” They were sure to clarify, however: “No arrests have been made at this time. The crimes currently being investigated are animal cruelty and conspiracy to commit a crime.”

The case shouldn’t be too hard to crack. After all, whoever posted the Craigslist ad left a major clue as to their identity — a blue Google maps indicator pointing to their house in a satellite image.

The house belongs to a neighbor of the Glasses. Suspiciously, too, that same neighbor had approached the couple a month earlier asking if the peacock could be re-homed elsewhere. “We all said no,” Melissa recalled of the encounter to the Outpost.

Humboldt Sheriff’s deputies have visited the suspect’s home and served him with a search warrant. But Officer Samantha Karges writes to me over email, “No further information is available for release.”

After speaking with a different sheriff’s deputy, the Glasses don’t have high hopes. “It was discouraging, because while he said we may make a case, he was pretty transparent that it would be a lower priority [given] the backlog of cases,” Melissa Glass told the Outpost. “It’s appalling to me that there are no consequences for someone taking a hit out on our pet. And the person who lives under that map marker knew very well that it was loved by many.”

The irony to all of this is that the man beneath the map marker is Ragen Tilzey, a 60-year old accountant/tax preparer who is a nature lover in his own right as a member of the local conservation organization Save the Dunes. “If it was some old codger in the senior park with a gun, I would be upset and angry. But this feels so much more personal because of the prior history, you know?” Melissa Glass remarked to the L.A. Times. (I reached out to Tilzey multiple times for comment to no avail.)

At present, the residents of McKinleyville are still reeling from the contract killing that claimed the life of their cherished community peacock. Along with the bird, it seems the small town’s innocence was whacked as well.