‘My girlfriend is starting to realize she may be a sex addict — so that is an interesting dynamic we have going on.’

After graduation, the pressure to find a partner and settle down at some point will only grow. And while the challenge of finding a lifelong partner is frightening to anyone, young asexual men like Tim often have no idea where to even start.

“The idea scares me,” Tim explains. “I’ve heard [about] many issues with allosexual partners” — a term referring to sexualities that aren’t asexual. “I tend not to want to get involved romantically with people because I know accepting the fact they would get little to no sex is not good for allosexual people, and I don’t want to break someone’s heart.”

Because of society’s expectations of how allosexual men should act in the dating world get projected onto asexual men, Tim’s anxiety has skyrocketed. “The media portrays men to be sex-hungry dumbasses,” he says. “Even the most ‘leftist’ of people can still give into this idea, and it upsets me a lot. … It makes me feel like asexual men are unnatural, or that even heterosexual men who are not [hypersexual] are not ‘real’ men.”

Megan Carroll, a PhD sociology candidate at USC researching asexuality, says that the Asexual Visibility and Education Network currently defines asexuality as “a lack of sexual attraction,” but it’s much more nuanced than that — especially for asexual men.

“It’s a bit messy because the identity movement is so new,” she explains. “Lack of sexual attraction does mean lack of interest in sex, so it’s a sexual orientation that refers to who one wants to have sex with, which is nobody.”

According to Carroll, the wide spectrum and the lack of a “perfect litmus test to confirm whether someone is asexual” lead to a lot of assumptions. Many people think guys like Tim just have a low libido or haven’t sexually matured. But these assumptions about asexual men are misguided, Carroll explains.

“An allo person with a lower libido would be different because they might still look at a person and think, They’re hot, I want to have sex with them, but I’m not in the mood,” she says, adding that if asexual people have a libido, they’ll describe it as “directionless.” In fact, she adds, “many asexual people express annoyance over their body for having a sex drive.”

In other words, where an asexual’s libido feels “directionless,” allo people have made concrete associations with what sparks their libido. “They’ve felt their libido activate at some point and recognized its orientation,” she says.

“People tend to take on the asexual label because they find it helpful to describe their experience and/or connect with other people who’ve had similar experiences,” Carroll explains.

To learn more about what life is like for asexual men, I talked to Tim and a few others about love, sex and relationships. What’s it like navigated a sexually charged world as young asexual men when your feelings toward all three are tepid at best? 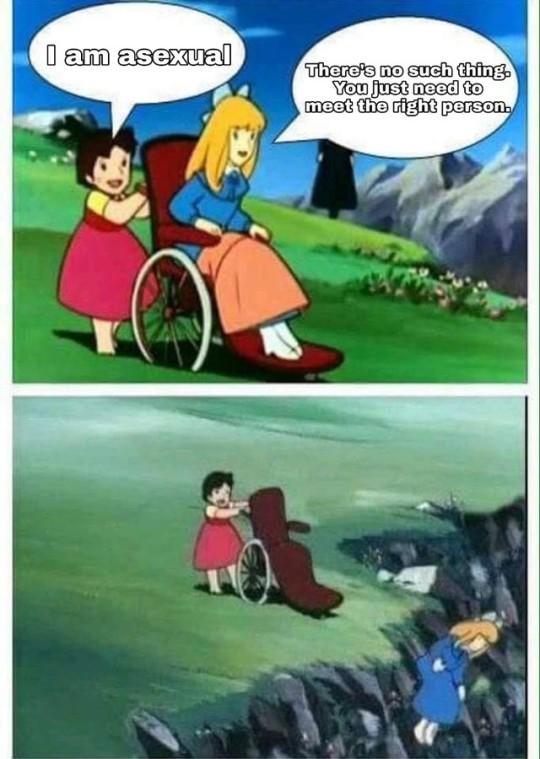 Daniel, 20: I’ve had a girlfriend for half a year now. She is starting to realize that she may be a sex addict. So that is an interesting dynamic we have going on. This is my first girlfriend who I am openly asexual with, and there is a lot of compromise involved. Asexual men face a lot of problems, but thankfully, this is the only problem we have. Everything else is going pretty swell in our relationship. I’m not a fan of sex, but I will do things to a certain extent to stay in a relationship.

When it comes to communicating my sexual boundaries, I’ll just be blunt and [not] apologize. I’ve told my girlfriend what I was willing to do, what I might do later on and what I would never do. If she did things that I wasn’t about, I’d tell her straight-on. I find, for asexual men, it is best to be direct with these kinds of things.

I’d never had sex, even before I knew I was ace [asexual]. Never had a relationship that lasted long enough to get there, and I didn’t seek it out. I thought that was all just because I didn’t feel like it at the time. It wasn’t until I met a friend of mine who is also asexual that I learned what asexuality is. After that, it was all just connecting the dots to figure out that I fit the mold of other asexual men.

I get pleasure in my life from Dungeons and Dragons mostly. Magic the Gathering and games with my friends. Classic nerd stuff. I’m a big fan of stories. [I’m] a filmmaker. Telling and creating stories is some of the most fun that I can have. Storytelling is in my blood. I love it.

I haven’t come out to my family but I have come out to my friends. They all are accepting and wonderful. Some understand it a little less than others, but they never judge and ask before they assume something. With my family, I don’t think I am scared; I just kinda keep forgetting to.

Tim, 22: I have kind of a cuddle/kiss desire. When I see someone I like — which usually takes a while, since I kind of have to be friends with them first — I want to be near them and talk with them (pretty normal), and the extent of what I want to do with them is cuddle and maybe kiss (kind of gross, but I’m open to it). There is no want beyond that. While I can get erect to these thoughts, they are disconnected from the want of sex.

To put it simply, I don’t want to do anything with the erection. Like, well-dressed men and women (due to aesthetic attraction) can give me erections, but I would never want sex with them. And with just aesthetic attraction, I have no want of cuddling or kissing just from sight. I would need to get to know them.

I discovered I was bi-romantic when I had a crush this year on my fourth-year roommate. Effeminate men are a big turn on (in an ace way) for me. I wish he were bi or gay, but alas, nope.

Socially, even for asexual men, it is more standard for men to ask women out, [so] I have no issues having to reject people or deal with people asking me out. I also purposefully pretend not to pick up on hints that someone is into me until they just eventually leave me alone. While this may come across as a little mean, I don’t like having to reject people and see their sad faces, and I prefer this alternative.

Like other asexual men, I have not had a sexual partner, so I have not done this before, but assuming I have a partner, I would have to be very upfront about my asexuality and what that means for them (little to no sex). I hope I would be persistent with it and not be pressured, but I cannot say.

The idea of sex to me is kind of neutral to negative. I don’t like people near me, and the idea of being that close to someone smelling their weird smells, feeling their saliva, other fluids, hearing moaning and such… just is a no for me. Since I have no sexual attraction to people, that desire for sex that would turn off those disgusts is not present.

At least, that is how I see it. Being neutral toward sex for the sake of a possible future partner is what I’d like to do, but I don’t really think I like the idea of having sex with anyone.

Video games and relaxing give me pleasure, being alone and just reading or lying around in silence or with some music. That’s all I need.

As far as “coming out,” I don’t really want to tell new friends about my asexuality. In terms of family, I have not [told them] and do not want to tell them. I’d doubt they’d understand. 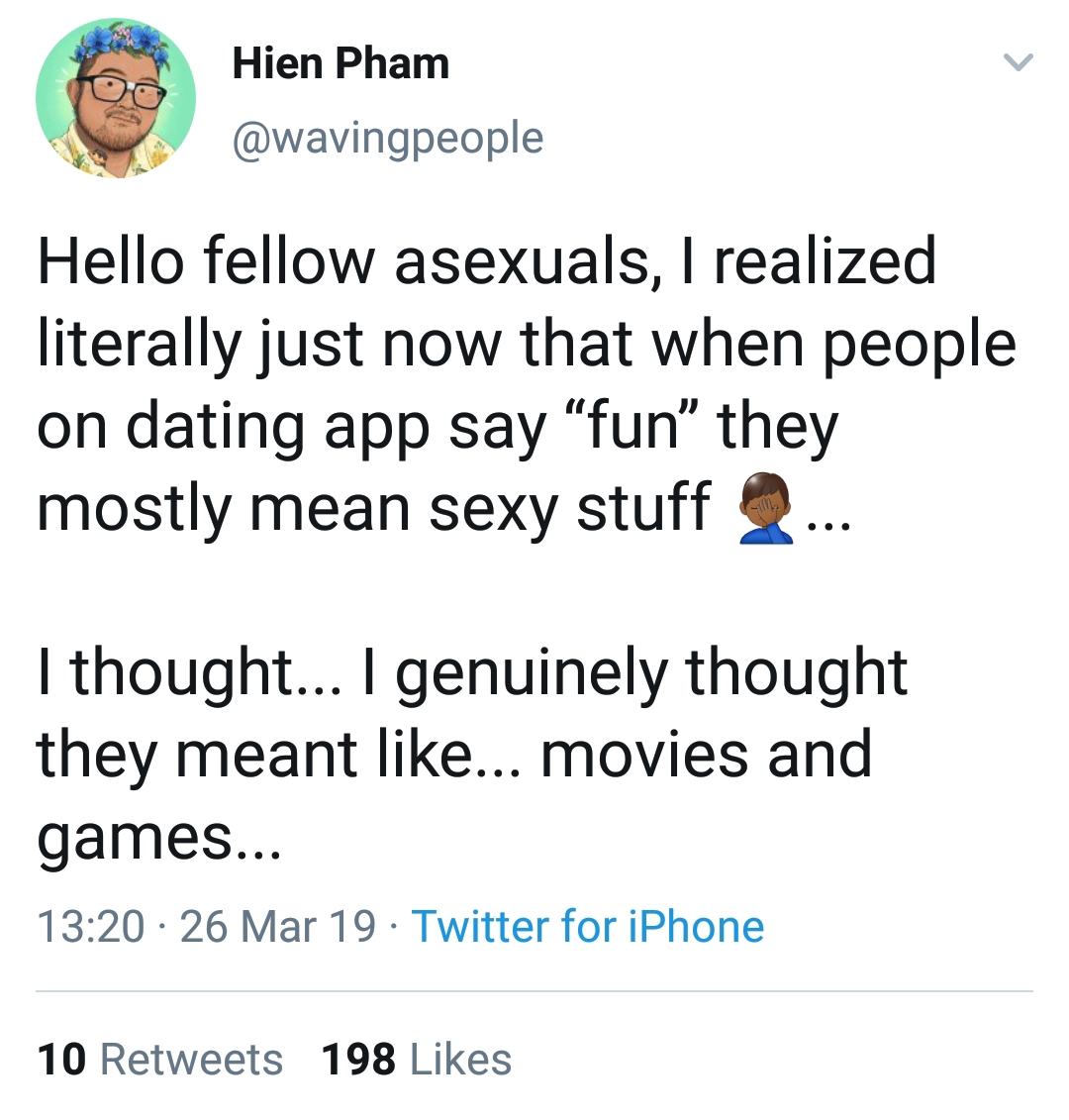 Sean, 22: My discovery came around age 16 when I saw the word asexual and found its definition. Before then, I wasn’t sure where to put myself. I didn’t really feel sexual toward females, and I felt sure that I wasn’t gay due to other childhood issues.

My friends are some of the best people I know. When they heard it, they didn’t care or even acknowledge it. They just accepted it. My sister believed it and still does. The rest of my [Islamic] family doesn’t know, not that it would matter if they did. There’s just no point in telling them. Stay away from practicing Muslims.

I don’t date people; never really tried. I felt no need to date people. The closest relationship I need with people is friendship; anything beyond that is too intimate for me as it requires touching and whatnot, and I’m fairly repulsed by people touching me.

I don’t really communicate sexual boundaries with anyone. [I’ve] had zero partners and little to no interest in any. Maybe I’ll try in the future when I’m in a more settled position in life.

For asexual men, we can find there is so much to do in life to find pleasure over sex. I quite enjoy reading, writing, computer games, cycling, walking, talking to people. I really love getting to know people, probably my favorite hobby.

Honestly, I never use the [asexual] label. It pretty much never comes up. If you’re gay or something, people notice that. If you’re asexual, no one notices. Why would they? All you do is not date people (based on your type, obviously). And when they do ask if I have a partner, I just say no, and the conversation just sort of ends at that. I haven’t met anyone who really asks why.

Asexuality is a very small part of my life and personality. It never comes up. I’m known as the computer-game-playing history nerd by my friends. My asexuality hasn’t really affected my life at all. It’s there, sure, but it doesn’t do anything. Kind of like eyesight or the ability to walk fast. No one notices it because it’s not a defining trait in a human being.