“I had to fucking see this, now you do too.”

So goes the caption of a viral tweet displaying the lurid “DADDY’S STICKER CHART,” a kind of juvenile schedule in which household chores like washing dishes, bathing “the rugrats” and cleaning up vomit — done often enough by “Daddy” — accrue rewards such as a 12-pack of beer, no nagging for a week, and most infamously, a “BJ!!!” The tweet, which has more than 12,000 likes and 2,000 retweets at the time of writing, elicited almost a thousand repulsed replies, including, “For sale: hetero marriage. Fucking gross,” “When your husband is just one extra kid…” and “I want to rescue her!” 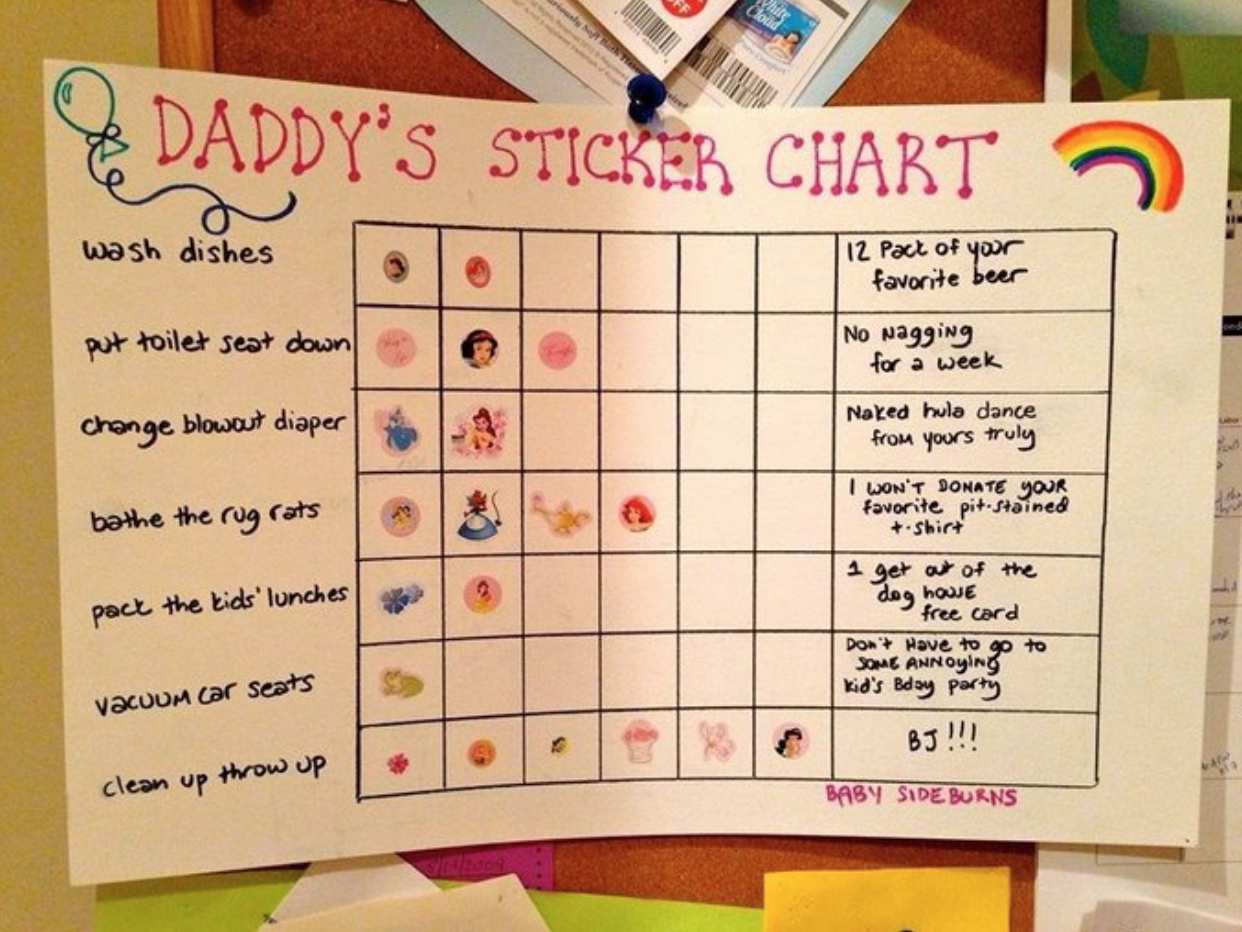 As some users were at pains to point out, the chart is the five-year-old creation of parenting blogger Karen Alpert, aka Baby Sideburns, and was intended as a joke. The gag isn’t the only one of its kind, either. In an episode from Season Six of 30 Rock called “The Return of Avery Jessup,” Liz develops a similar chart documenting her “Crisspoints system,” in which chores like unloading the dishwasher and killing spiders earn rewards such as “daylight sex.” And earlier this year, Facebook user Brandon Sillings’ “sexy pics” to his wife (i.e., pictures of him cleaning the house and feeding his baby) went viral. The same for a photo of Instagram user @bri.dietz kissing her husband while he holds a letter board with the text, “HELPING WITH HOUSEWORK SO YOU CAN GET LUCKY IS CALLED CHOREPLAY.”

As with DADDY’S STICKER CHART, the latter caused backlash among those who felt the image reinforced retrograde gender roles. “‘Helping with the housework’ infantilizes men and implies that the home is the woman’s job,” responded one user. Another added, “It shouldn’t be so rare he’s ‘helping’ that when he does it’s a turn-on.” 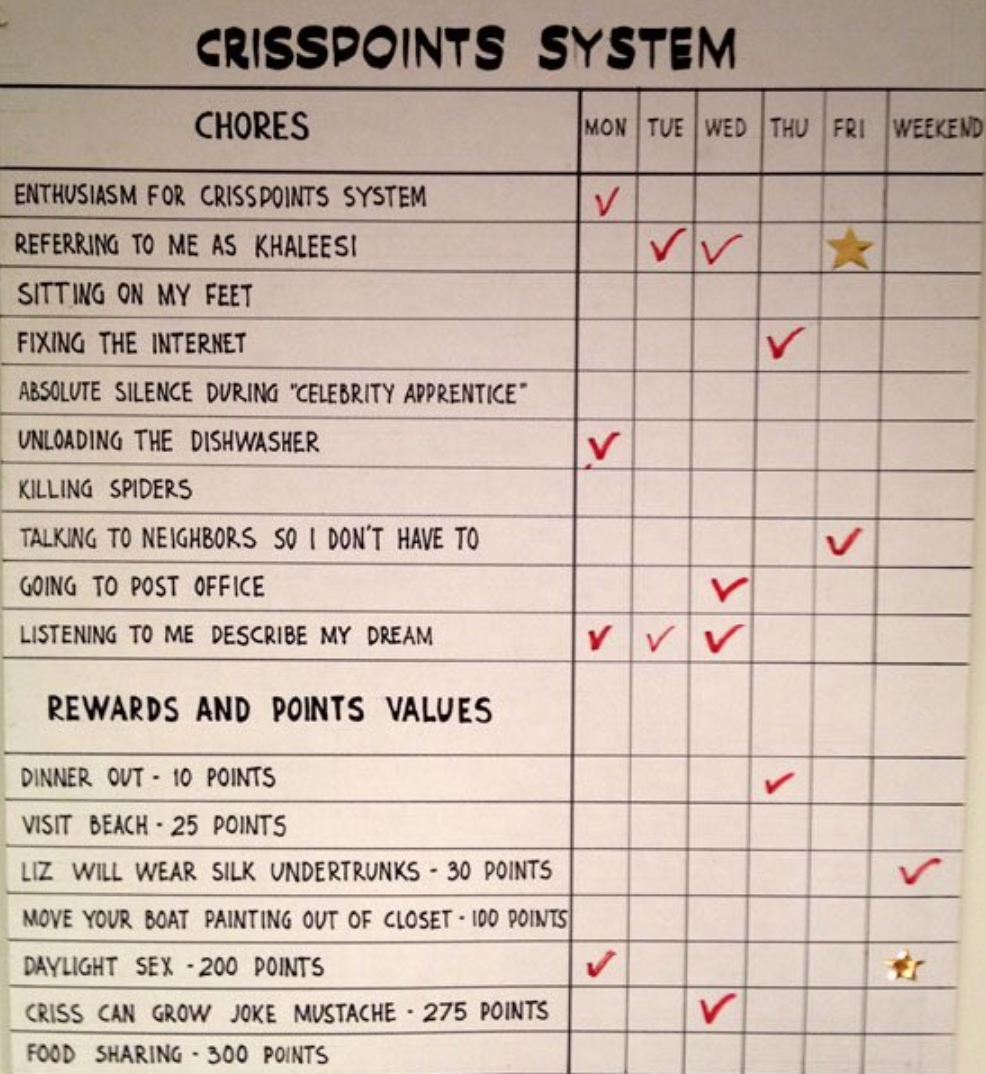 Joke or not, these images all express a common point, namely that women are so desperate for their male partners to do their fair share of the housework that they’ll barter favors, sexual and otherwise, to ensure that the job gets done.

But is this really happening, or is it just a tired gag?

Based on some of my own investigation, it seems more real than not. In particular, about a dozen women tell me that they have systems in their relationships where housework gets rewarded, and some say the rewards are sexual. A few clarify that the exercise is meant to be kinky, and not just for the man’s benefit, while others say it’s definitely a way of getting done what they want done.

Jillian, a 24-year-old student from Washington, says that her aunt once got drunk and revealed she’s exchanged sexual favors for housework for years — the reason Jillian’s uncle seems to be so domestically useful. “She always wants to do little handiwork and remodeling projects around the house,” she explains, “and if he’s grumpy about helping her, she offers a blow job and he gets right on board.” Another Jillian, a 30-year-old paralegal from Nova Scotia, has a more modern and egalitarian twist on the arrangement. “We use an app called OurHome,” she says. “Basically, you complete tasks to get points, then redeem those points for different items. We both use it and can redeem rewards.”

Domestic labor — sometimes incorrectly labeled “emotional labor” — has long been a site of feminist struggle. The idea that women are naturally suited to household tasks is the conservative rationale for traditional gender roles, and second-wave feminists like Silvia Federici railed against it. “Not only has housework been imposed on women, but it has been transformed into a natural attribute of our female physique and personality,” she argues in her essay “Wages Against Housework,” which provides the theoretical underpinning of the Wages For Housework movement she spearheaded. “Capital had to convince us that it is a natural, unavoidable and even fulfilling activity to make [women] accept our unwaged work.” Feminists quickly realized this con and argued that not only is domestic labor a relentless drudgery rather than some kind of charmed task, women shouldn’t be expected to shoulder all of it (or not, in Federici’s case, for free).

More than 40 years later, though, the message has only partially gotten through. While Harper’s Bazaar articles on the topic of “emotional labor” and comics about the mental load go viral — and men and women are more likely than ever to identify as feminist — recent analysis conducted by University College London found that “gender norms remain strong” when it comes to domestic labor, with women performing approximately 16 hours of household chores every week while men do closer to six (plus, women were found to do most of the domestic duties in 93 percent of the couples analyzed for the study). In other words: The idea that housework is women’s work may be less socially acceptable, but it’s still the practical reality in most households.

That’s probably why the image of the husband who “helps” with the housework has been eroticized. In 2007, the Porn for Women book — which aimed to “give the fairer sex what they really want: beautiful, PG photos of hunky men” cooking, vacuuming and changing the toilet roll — sold more than 100,000 copies in its first six months. Jokes then about men doing “choreplay,” sending “sexy pics” of themselves doing housework and earning “BJs” by cleaning up their kid’s vomit are actually fairly stale — decades old and predicated on the idea that nothing gets a woman hornier than the sight of a man cleaning. 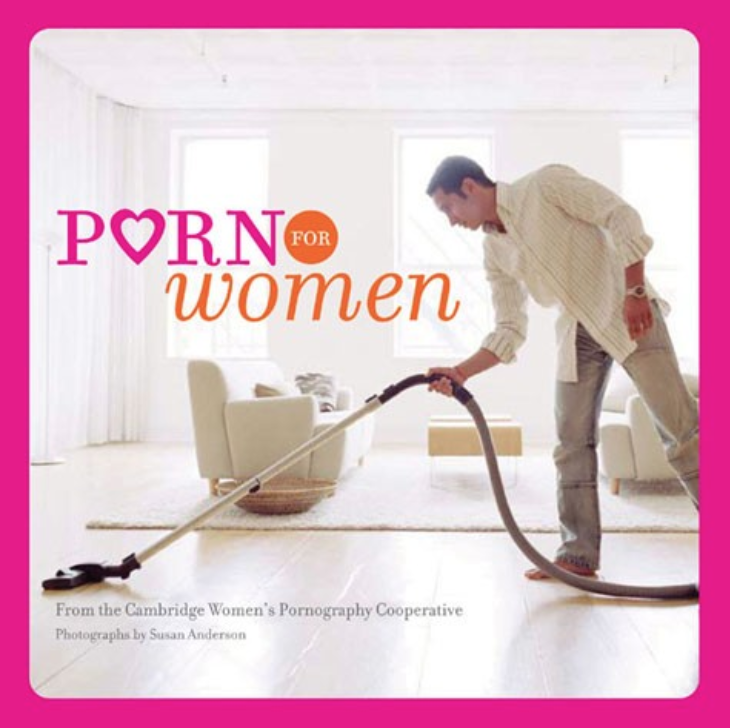 Feminists who take issue with this particular brand of mommy blog humor are often accused of not being able to take a joke, but a couple of women I speak to tell me that their male partners took the idea of sexual rewards for domestic work very seriously. “I was married, and in the first eight weeks after I delivered our kid, I had zero sex drive and relied on him heavily for a multitude of things,” says Emily, a 32-year-old student from Texas. Her husband, though, said he was “sick of being treated like a servant” so he “needed something in return” from Emily. “He put us (i.e., me) on a strict grocery budget, but our bill grossly outweighed it, so he offered me more money in exchange for blow jobs,” she says. “The expectation was that every single household chore would be my job, as well as all parenting duties. And whenever I asked him to do anything around the house, he’d ask for something in return.”

Examples like Emily’s and Rachel’s are extreme, but they’re not uncommon. They help illustrate why feminists take issue with memes about men accruing blow-job points for folding laundry. It’s not that they aren’t in on the joke, it’s that the gendered power dynamics they reveal aren’t particularly funny.

For her part, though, Jillian from Washington is ambivalent about “choreplay” jokes and daddy sticker charts. “I wouldn’t want that dynamic in my relationship, and I don’t love that it’s based on the idea that housework is women’s work and men need something in exchange for graciously participating in it,” she explains. “But also, whatever works for y’all works for y’all.”