Are ‘UGG Buds’ the New Sneakerheads?

TIL: UGGs originated with surfer dudes, not the ‘Basic Bitches’ they’ve become synonymous with

This meme pretty much perfectly captures everything we think of when we think of UGGs today: 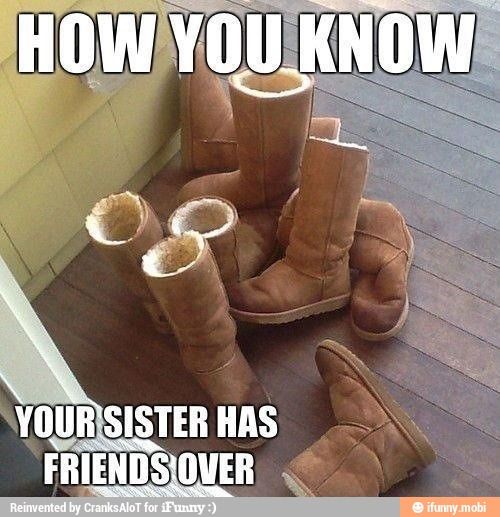 They are, of course, synonymous with the “Basic Bitch,” the type of collegiate female (or female with permanently collegiate style) to tuck their leggings into their UGGs boots while cozying up to scroll Pinterest for desserts recipes served in mason jars.

But here’s something you probably didn’t know/remember: Before UGGs belonged to basic lovers of loungewear, the slip-on boots were the preferred footwear of surfer dudes. Australian surfer dudes to be exact. An “ugg” was a common term in Australia for the boots surfers slipped into after hitting the waves to absorb moisture and warm their feet long before this type of boot, along with its brand name, launched in the U.S. (The Australian surfer Brian Smith partnered with a co-founder named Doug Jensen and brought UGG boots to California in 1978.)

Today, UGGs is trying to return to its manly origins. Case in point: The brand debuted a collaboration with Eckhaus Latta in New York last week, and they’ve put male influencers like Luka Sabbat and Heron Preston on the payroll, along with Patriots quarterback Tom Brady. Two other famous dudes recently spotted in UGGs: Carolina Panthers quarterback Cam Newton and actor Shia LaBeouf.

What, though, of the other guys who aren’t a Brady, Newton or LaBeouf? Do they, too, find UGGs anything but basic and anything but exclusive to a Basic Bitch? To find out, I asked a few of them about why they strap UGGs their feet, how to style them and if they give a fuck that meme-makers consider them to be feminine and lame.

‘Once my feet were in that shearling liner, I was hooked.’

“I bought my first UGGs over eight years ago, possibly ten,” 32-year-old Jeffrey Hawkins, a fashion designer from Chicago, tells me. “I first saw them in a magazine and on celebs. Then, one day, I was walking through the men’s shoe department and they were on sale for $99. Once my feet were in that shearling liner, I was hooked.

“My first pair were the ultra short boots. The ‘ultra shorts’ were originally a men’s only style that have now been released for women. Since my other boots are more heavy duty, I treat UGGs as a casual boot. I typically wear them with a flannel or another button-down shirt, sweaters, skinny jeans and my usual layers of jewelry. I’ve also worn them with a shearling-trimmed coat and matching gloves.

“Being a menswear designer, I love fashion history. But when I got my first pair of UGGs, I was teased relentlessly. I had to constantly inform people of the company’s history and that these are men’s shoes. I don’t hear those kinds of comments as much anymore, since so many guys wear them now. I generally only get looks or giggles because my classic UGG boots in the ‘tall’ style are typically taller and more visible than the short, chukka lace-up boot a lot of guys wear.

“Overall, I’m a shoe fanatic and enjoy tucking my pants in boots. I started doing this because I didn’t like getting my pants dirty in inclement weather. Then it just became my look. I also like that it’s not a look every guy can pull off.”

‘I even hiked to the top of the Catskills in my UGGs once.’

“I was always an UGG fan from afar, but I thought that I wasn’t ‘L.A.’ enough to own a pair,” says Jonny Makeup, a self-described “reclusive former nightlife personality and fashion renaissance man” from L.A. by way of Pennsylvania. “That is, until my old pal Jeremy Scott gifted me a pair from his 2017 collaboration. I’ve been sold ever since. I even hiked to the top of the Catskill Mountains in my UGGs once.

“I own the classic minis, the classic shorts, the Tasman clogs and a loafer style. I’d die to have the Y-Project thigh highs and even the new Eckhaus Latta UGGs, but I wish they would’ve done the new slingbacks for men!

“Shearling is my fave fabric. Kundalini teaching say shearling creates a grounded insulation between oneself and the magnetic pull of the earth. So why not feel grounded while feeling fashion?”

‘I receive lots of compliments every time I wear them.’

“I got my first pair of UGGs for Christmas in 2015 — the men’s Chukka boot in chestnut,” says 25-year-old event planner Damian Boss. “I remember being so excited because I hadn’t really seen them on anyone else before. They had the warm fur inside and kept my feet so warm. I loved wearing them on weekends during the day when visiting family or just running errands. I’ve worn them with jeans and even sweat pants. You can really dress them up or down depending on your mood. I’ve received a lot of compliments every time I wear them.

“Men who don’t recognize them as a shoe for men are insecure. They care too much about what others might think and are afraid about people questioning their masculinity. But me? I don’t care. They’re made for men, so I happily wear them.”

‘Ease of use is what I like the most. They do get stinky, though.’

“I’ve been been wearing Uggs since the 1980s,” says 59-year-old CJ, a cermacist from Tulsa. “I worked in a backpacking shop in Houston that sold them and bought a pair one winter. I’ve been wearing them in cold weather ever since. They’re easy to put on, comfortable and fairly warm. Ease of use is what I like the most. They do get stinky, though.

“Funny enough, a young lady stopped me in a restaurant a couple of weeks ago and said something to the effect of how ‘awesome’ it was to see a guy wearing UGGs. Her word, not mine.”

‘I actually grew up thinking they were cool.’

“I’m a chef, so I’m on my feet a lot in kitchen shoes,” Kirby, a 25-year-old from L.A., tells me. “That’s why I wear my UGG slippers as soon as I’m back home for the night. They relax me, and are comfortable. I’ve also definitely cooked in my UGGs at home on several occasions, which is a clear distinction from cooking at work. Lastly, I like the look of UGGs better than other slippers, and since everybody in my family has been wearing them my whole life, I grew up thinking they were cool.”

“I honestly feel like I’ve had UGGs since they were only making the boots,” explains Mike, a 39-year-old camera operator. “But my interest got serious when my Uncle Mike kept asking my cousins and I to pet his ‘moose.’ Nobody understood what he meant for months until we realized he was talking about his shearling Minnetonkas. My first pair of UGGs that became a daily-use pair were brown Upshaws, similar to a moccasin. Those were my favorite until my mom got me green velour slippers, which are my all-time fav slipper. They look they belong to Bishop Don ‘Magic’ Juan.

“In two years, I collected four pairs of UGGs — three Upshaws and the classic boot. I still have all of them as backups in the garage, except the boots, which took on water damage and mold. I’m currently wearing the Kentons today. I went the Kenton route because I ruined the heel in every pair of Upshaws by wearing them like house shoes. As a kid in the 1990s, I was either in Jordans playing basketball or my house shoes at home.

“These days, I’m either running in my running shoes or working in Red Wing boots, but when I’m home, it’s my UGGs all day, all night. That said, when I was looking for warm waterproof boots for work, my girlfriend suggested UGGs and I scoffed. I wouldn’t be caught dead in actual UGG work boots. Not sure why, but I can’t imagine wearing UGGs as anything but slippers. Men’s UGG boots for work or whatever are super lame to me.”