Are There Astrological Signs That Are More Prone to Addiction?

And: What does it mean to be on the cusp of a sign?

I’ve been told so many times that most straight men don’t (or won’t) believe in astrology. And yet, the more I yap about it to the guys around me, the more interested they seem to become. So this column is dedicated to those dudes: The suspicious and the curious, the skeptical and the inquisitive. I’ll be here every week, tackling the stuff your basic-ass horoscopes will never get into. Because you know what? You might think astrology is esoteric snake oil, but everyone around you still judges you based on your star sign.

Are there signs that are more prone to addiction? — Matt L., Sagittarius
Addiction is something anyone can succumb to, and it’s obviously far more complicated than just reading someone’s birth chart. That said, a birth chart can provide some indicators.

Mostly what we’re dealing with in this regard is the planet Neptune, and any aspects it’s making to someone’s personal planets or points. Also, the house Neptune is in can indicate a propensity for addictive behaviors. Similarly, we can look at where and how Jupiter is placed, as the largest gas planet in our solar system represents enlightenment, higher learning, expansion and excess.

Further, Neptune is the modern ruler of Pisces, and the energy of Pisces is associated with escapism. Now, the high-functioning Pisces escapes through music, the arts, etc., but a lower-functioning one tends to escape through drugs and alcohol. Meanwhile, Jupiter is the ruler of Sagittarius (yeah, I’m talking about you here). Sagittarius’ energies are philosophical, and they typically expand their minds through travel and studies. But depending on how Jupiter is placed in the chart, it can indicate physical expansion, too — through gaining weight, drinking too much and taking too many drugs.

Let’s look at the chart of Kurt Cobain as an example (note: there’s clearly much more going on here than just Neptunian and Jupiterian qualities — there are also a LOT of Pluto aspects, which are destructive by nature, but don’t solely indicate addiction): 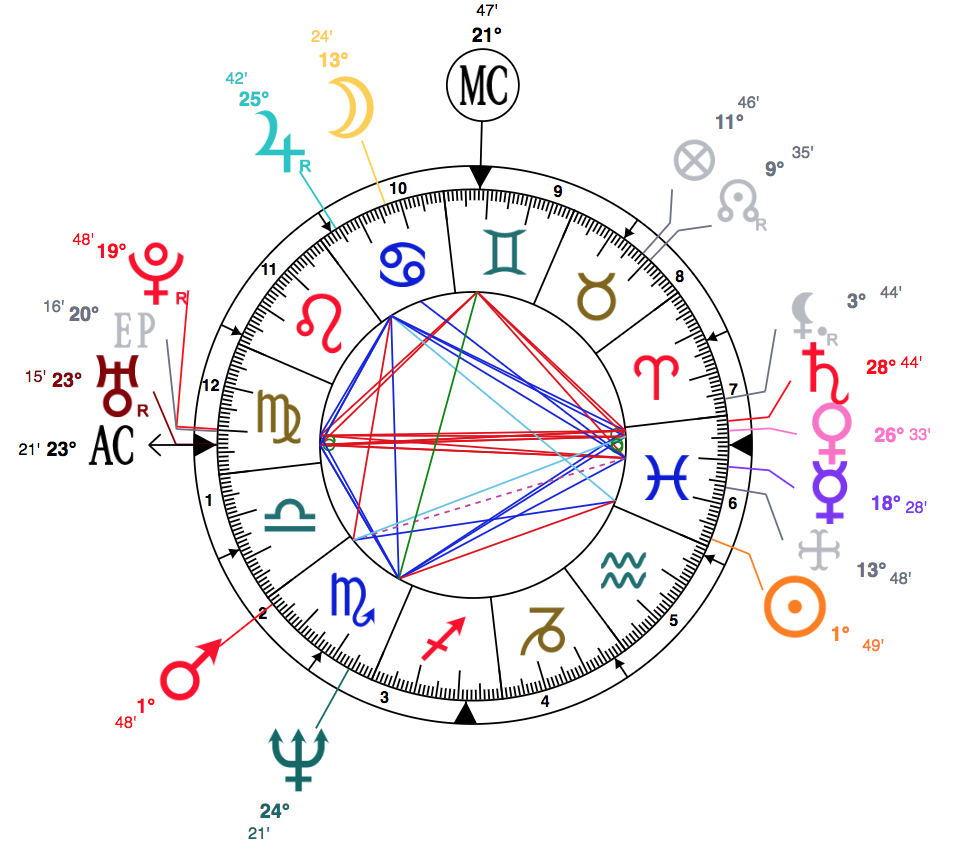 Cobain was someone who had most of his personal planets in Pisces, as well as a aspects from Neptune to those very planets, essentially multiplying his Piscean energy and making it challenging to moderate. In other words, his tendency to escape through music and drawing was never gonna be enough to stifle his addictive tendencies. He also had Neptune making a challenging aspect to the area of his chart that rules our public standing and reputation. This is basically what we all witnessed — as he fell further into addiction in his private life, it directly impacted what his public reputation and career.

If that wasn’t enough, Jupiter presented a challenging aspect to his Mars (the planet that rules our will and motivation), which probably made it difficult for him to control his urge to act (Mars) on his excessive (Jupiter) addictive tendencies.

In all, when I see a chart that has this much Pisces, Neptune or Jupiter, it’s disconcerting. The first thing I’d ask is how they manage their tendency to want to escape from the world. The next question: Do they have difficulty controlling their consumption? Since you’re a Sagittarius, I highly suggest looking at where your Jupiter is placed, since it’s the planet that rules your sign. If this is about someone else, perhaps viewing their entire chart can lead you to a clearer understanding of their addiction. Of course, once the addiction is acknowledged is when the real work begins.

What does being on the cusp of a sign mean? — Jeff G., Pisces
There are two ways to look at this: One is the way most people probably interpret a cusp — as the merging of two energies. So, for example, if you’re a Pisces on the cusp of Aquarius (one day on either side maximum, since the value of the orb degree can’t really be more than two degrees), your general demeanor would combine the imagination and intuition of Pisces, with the altruism and rebellion of Aquarius.

The second way is to interpret it almost in reverse. That is, to not view it as a merging of energies, but as a pointed, potent manifestation of a single sign’s energy. In astrology, we refer to this as the “anaretic degree,” and the “critical degree” of a sign.

So if you’re the first day of a sign (0 to 1 degrees of a sign), you’re considered a “pure and untarnished” representation of said sign, without any of the other information the sign has to offer as the sun moves through the energy over the month. The last two degrees of a sign, the anaretic degree, is associated with a fixed mindset, regardless of the sign. That means it brings a similar intensity, though it’s associated with learning the karmic lesson of the sign in order to grow and use the energy more constructively. It’s essentially like having a PhD in that sign.

I prefer the latter in interpreting cusps, because this is what I’ve found to be most true. Using Kurt Cobain as an example again (see above) — he was a Pisces by 1 degree. He fully manifested the energy that Pisces represents. Obviously, people are more complicated than just their sun sign, as I’ve said before, which is where we do start to find the overall merging of energies to create the whole of a personality. But those on a cusp I find to be purer than not.

Write to me! Because dude, I’m more than happy to tell you what your sign means w/r/t whatever is happening in your bedroom, with your friends and family or your job/office. Hmu at erin.taj@melindustries.com.