This deceptively goofy comedy is actually a heartfelt story about family, faith and grief. It’s not very good, but it’s emblematic of the former ‘Knocked Up’ star’s continuing evolution into an unapologetically sappy, sensitive grownup.

Seth Rogen has made a career out of playing sweethearts. Sure, his Knocked Up character seemed like a going-nowhere loser, but given the chance, he’ll become a better man. Whether acting, writing or directing, his movies follow a familiar tonal template — brash and crude on the outside, sensitive and surprisingly emotional underneath — and watching him transition on screen from bromance dude to relatively well-adjusted grownup has been plenty satisfying. His 2014 comedy Neighbors was especially good because it satirized every immature, fun-loving stoner’s anxiety that they’ll eventually become a bougie, responsible adult — and that a new generation of partying young whippersnappers will come along to make you feel bad about getting old. That Rogen hasn’t lost his sense of humor along the way has been even better: Who needs another aging, self-serious former comic?

An American Pickle might feel like a typical Seth Rogen project — a zany movie about an early-20th-century man who wakes up in modern Brooklyn — but while the film’s ostensibly a comedy, it ends up being more heartfelt and touching than you might be expecting. The movie feels personal in ways that some of his earlier projects didn’t — not necessarily autobiographical like Superbad (which he co-wrote and produced), but an opportunity for him to discuss things like family, tradition and faith. As the next step in Rogen’s creative evolution, the film’s really interesting. But as a comedy or social commentary, it’s pretty flat.

Based on Simon Rich’s New Yorker novella “Sell Out,” the story opens in 1919, where we meet Herschel (Rogen), a heavily bearded Jewish ditch-digger who lives in the grim fictional Eastern European land of Schlupsk, where the ground is barren, the skies are gray and everybody is miserable. Herschel’s one ray of sunshine is Sarah (Sarah Snook), whom he marries and impregnates, excited at the prospect of starting a family. But once their village is leveled by Cossacks — this is the sort of film that just assumes you’ll find the word “Cossacks” hilarious — Herschel and Sarah move to America, hoping to build a better life for their newborn. And at first, the New World seems promising, until Herschel takes a tumble at the pickle factory where he works, falling into a vat that’s sealed up right before the place is condemned.

Cut to 100 years later. The factory, which is in New York City, is excavated and, miraculously, Herschel has been perfectly preserved thanks to the marvels of brining. (Don’t linger on the logic: One of An American Pickle’s funniest moments concerns how quickly the characters gloss over how preposterous the film’s premise is.) Not knowing a soul — everyone he cared about, like Sarah, has long since died — Herschel is told he has a great-grandson about the same age as himself who lives in Brooklyn. Happy to reconnect with family, he meets Ben (also played by Rogen), who is the epitome of the modern Brooklyn hipster, complete with ambitions of launching an app and boasting a fridge full of different kinds of exotic milks. (Sure, you’ve tried almond milk, but have you tasted pea milk?)

The directorial debut of Brandon Trost, who’s been the cinematographer on several Rogen films, An American Pickle (which comes to HBO Max on Thursday) is a familiar fish-out-of-water comedy, with some generational-clash jokes thrown in for seasoning. Herschel dresses like he’s an extra in Fiddler on the Roof, and Rogen plays him with a thick Eastern-European accent. (It’s a mildly amusing riff on from-the-old-country clichés.) One of the character’s many shocks about contemporary life is that his great-grandson seems to have no connection to his Jewish roots. It’s the film’s most incisive (and bitterest) running joke — how immigrants practically kill themselves moving to America, only to have their descendents take that sacrifice for granted — but the actual conflict between Herschel and Ben is rarely that funny.

If the former’s broken-English uncouthness is a tired comedy bit, then the latter’s beta-male ineffectualness is just as well-worn a trope. Essentially, if you’ve seen the 2013 Saturday Night Live skit in which Tina Fey plays an impoverished Albanian immigrant living with the spoiled characters in Girls, you’ve got the premise of An American Pickle.

Rich adapted his own novella, chronicling Herschel’s attempts to make money in order to buy the small plot where his wife’s tombstone rests. His plan involves becoming an artisanal pickle seller — an extremely Williamsburg thing to do. (Ironically, his old-world wardrobe is now quite fashionable with the NPR-and-latte crowd.) But like a lot of An American Pickle’s gags, those playful jabs at white entitlement and hipster obliviousness feel lazy and obvious. Rich’s novella was published in 2013 — an eternity ago when it comes to topical humor — and consequently the cultural commentary doesn’t have much teeth.

Equally disappointing is the film’s shift to more politically-tinged humor in its second half. I’ll be careful of spoilers, but Herschel will eventually be elevated in the media, his antiquated worldview embraced as refreshingly candid and blunt. (Apparently, An American Pickle doesn’t exist in a universe in which Donald Trump got elected.) But both that plot twist — and the twist that soon follows — isn’t daring, clever or insightful. If anything, it connects An American Pickle to Rogen’s strained 2019 comedy Long Shot, which was least convincing when it tried to say something about our national discourse. In recent years, Rogen has become more politically outspoken, but thus far in his film career, he hasn’t been particularly interesting when he’s delved outside the comfy boundaries of relationships and male insecurities — two topics with which he seems much more knowledgeable. 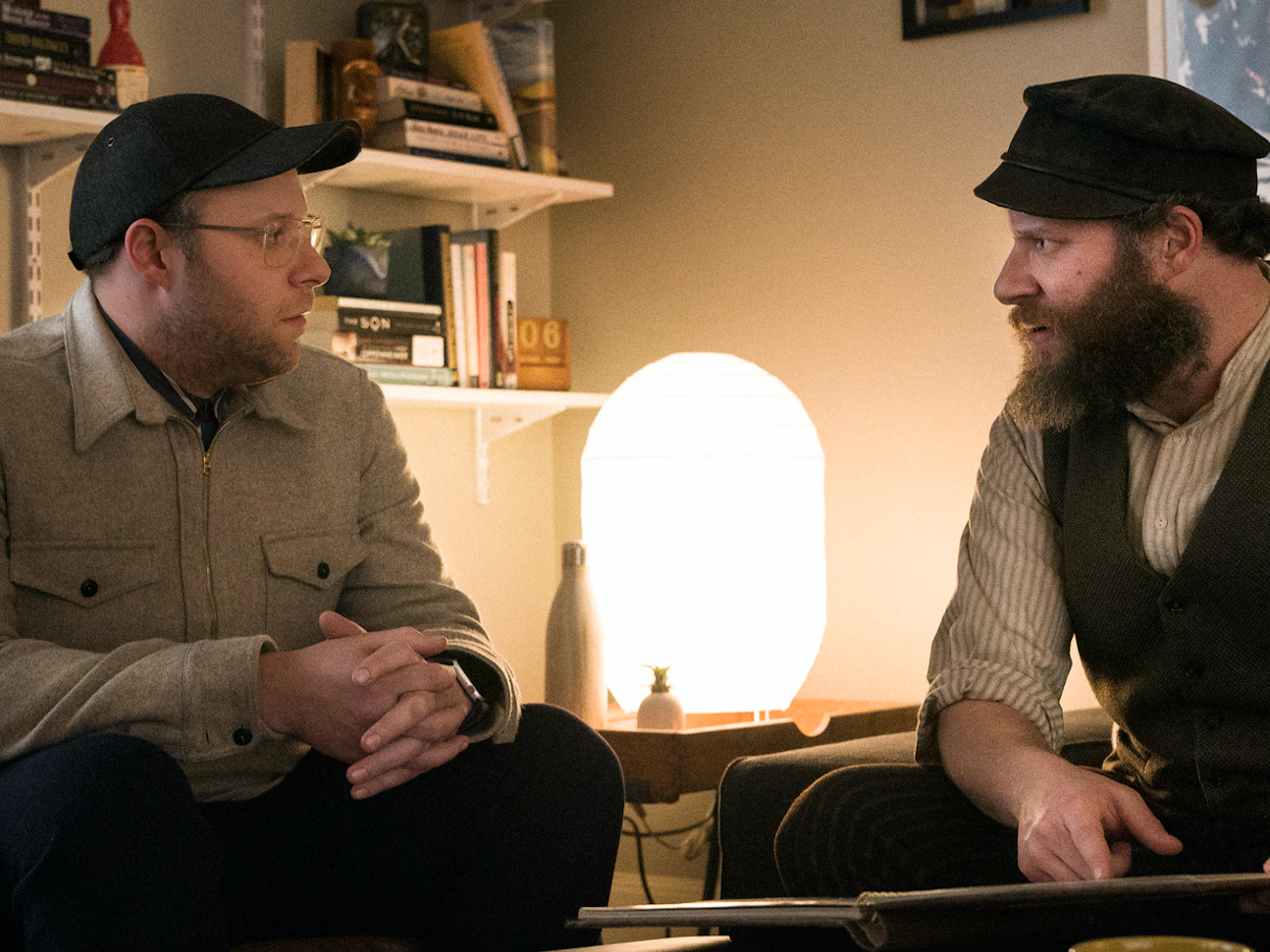 So, in terms of the movie most people assume Rogen made, An American Pickle is a forgettable mediocrity — neither sharp nor hysterical enough. And yet, as an embodiment of Rogen’s continuing, awkward growth, the film does have its merits. For one thing, outside of his so-so cancer dramedy 50/50, this may be his most overtly sentimental film. Herschel and Ben aren’t a dynamic comedic duo, but the movie is affecting when it examines how immigrant families sometimes aggressively shed their roots, giddily assimilating into a new culture as a means of distancing themselves from the past. There’s a guilt that comes with that cultural abandonment, however, and for Ben that shame is staring right back at him — Herschel even looks like Ben — and it connects to the embarrassment he feels at not living up to his potential. (Ben’s parents, who died a few years ago, convinced him that the whole world stretched out in front of him.)

None of that is really funny, though, and I don’t know how Rogen’s fans will react to a comedy that’s warm and thoughtful, as opposed to anarchic or crazy. (Imagine if This Is the End was just about the friendship stuff — if Rogen, who co-wrote and co-directed the movie, had ditched all the end-of-the-world horror-comedy hijinks — and that’s what An American Pickle’s level of sentimentality is like.) Normally, his movies disguise their sincerity in outlandish premises, but this time, the setup doesn’t prove very rewarding, and so we amble for a while before getting to the emotional payoff. Turns out, this silly dual-role comedy is actually a portrait of grieving and the push/pull tension we feel about our family heritage — how we try to run away from it before learning to integrate it into ourselves.

For Rogen, that theme hits close to home. His Jewishness has often been central to his characters, but in An American Pickle, the two protagonists seem to be representing opposing sides of an argument, with Herschel serving as the devout, religious Jew and Ben as the stand-in for those who identify as Jewish culturally, as opposed to spiritually. Ben’s resistance to Herschel is, in a sense, a rejection of the religious traditions that have been passed down to him, and it’s a struggle Rogen clearly feels. (In a recent interview with Marc Maron, Rogen talked about it, mentioning that his wife “wants her Judaism to have some value to me, even though it doesn’t, in any way, shape or form,” although he later acknowledged, “As I get older, I appreciate that religion, you know, specifically revolving around death, like Judaism has a lot of protocol that is helpful.”) An American Pickle didn’t make me chuckle much, but I could appreciate its star wrestling with something profound — maybe not always entertainingly but certainly sincerely.

In a Seth Rogen movie, the characters will often joke when feelings come up — they’re still at a stage of immaturity where that kind of honesty freaks them out — but, sure enough, they’ll eventually expose their softer side. An American Pickle might be Rogen at his softest, not so concerned with jokes but, rather, trying to explore questions he has about the world and his own identity. Even if the film doesn’t quite work, his willingness to plug those spiritual concerns into a comedy about a guy with an exaggerated accent and a goofy beard who awakens 100 years in the future is its own kind of boldness. Few will consider An American Pickle one of Rogen’s best movies, but I suspect it might end up meaning more to him than some of his bigger hits — even if his younger self would probably make fun of him for thinking that.

Well, no matter: After all, part of growing up is deciding you don’t need to listen to that voice anymore.