There’s Something About Amy

So far this Democratic primary season, Bernie Sanders’ electoral victories have been curiously downplayed in the press. But the media still needs a horse race, even if it’s squeamish about acknowledging a winner; with Joe Biden in the basement and Elizabeth Warren underperforming, they’ve turned to the twin Midwestern hopes, Pete Buttigieg and Amy Klobuchar, the latter finally breaking into the top of the field with a third-place finish in New Hampshire. True, that doesn’t sound impressive, but the pundit class is relieved to feel slightly vindicated for their months of promising Klobuchar was a contender despite dismal polling.

This “Klobmentum” isn’t purely fictional, of course: a standout debate night made for millions in donations and bigger crowds. Some turned to her after Biden tanked in Iowa. And then, perhaps, there were a lot of under-the-radar Amy fans who finally felt comfortable announcing their support. Yet even months before this, people were talking about wanting to fuck her.

To some extent, all politics are psychosexual, even short of Trump defending the size of his penis on live TV. The lingering novelty of watching women vie for the presidency has only confirmed this time and again, whether it’s folks lusting after Tulsi Gabbard because she dunks on Hillary Clinton or deciding that Klobuchar, a reportedly abusive boss, must also be a thrillingly dominant force in the bedroom. That professional reputation, along with a prosecutorial flintiness, grimacing smile and boxy figure, have contributed to a fantasy of Amy as the mean MILF — someone who projects an image of heartland formality but might peg you raw (if you begged for it). 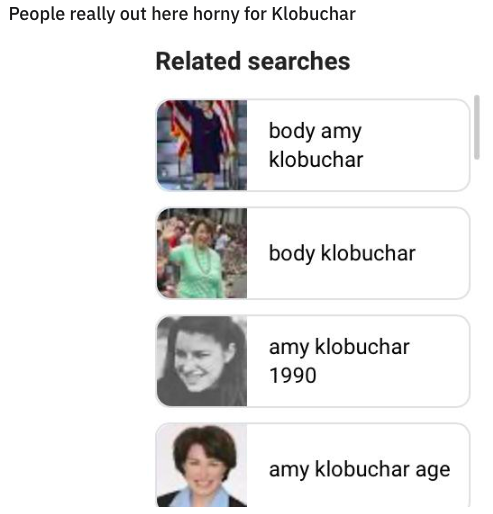 Some of this, I should note, is obviously a bit: The dirtbag left and Bernie shitposters get a laugh out of claiming kinky passion for Amy. Saying “I want Klobuchar to throw a binder at me,” in reference to the time she allegedly did this to a staffer, is perfectly in line with the suicidal submissiveness that colors the language of celebrity thirst. Instead of Timothée Chalamet running you over with a truck, it’s Klobuchar punishing socialists with her grimly “pragmatic” approach to government. Even her surname holds a seed of violence: for Klobuchar, it’s always klobbering time.

It didn’t hurt, either, that she chose to pummel Mayor Pete the hardest before the New Hampshire primary. In the minds of progressive millennials, she could’ve picked no better target.

Behind the screen of jokes, however, is a demographic actually hot for Amy, one we can loosely generalize as “liberal white Boomer dads” — the centrist male Democrats much closer to her in age. I first got hints of this from my own dear father, who argued to me that Klobuchar is the candidate best poised to retake the Rust Belt districts where Trump beat Hillary, and my girlfriend’s dad, who has moved from Biden into Amy’s camp with an equally nebulous pitch as to her “electability” among traditionalist and blue-collar voters.

What do the dads know that we don’t? Perhaps that men of their generation long for a hard-nosed, disciplinarian woman to take charge. That take is certainly bolstered by Klobuchar’s boast that she funded her first Senate run in part with $17,000 donated by ex-boyfriends. Her newly restated openness to a coalition that includes anti-abortion Democrats is yet another sign that a repressive and brutalizing streak is key to her appeal. Your lib dad is far more susceptible to conservatism if it looks like Amy. Hell, she even wears the same New Balance sneakers he likes. How could Warren compete?

Whoever you are, you likely agree that these times require an extraordinary leader. For some, that leader needs to be a “bad bitch,” although for a Democrat, this poses the trouble of agreeing with Meghan McCain about something. But that’s fine so long as you’re also white and middle-to-upper-class, since Klobuchar’s ruthlessness has historically applied to vulnerable black and brown people. Can’t you picture her ordering another series of drone strikes in the Middle East?

You don’t need universal health care, either, and the people who do simply haven’t worked hard, like you. Like Amy. Truly, hers is the middle way, viciously uninspired and withholding, the exact opposite of a promise. No, she says, the future will not be better, though if you are good, if you behave, you may hold on to the shitty deal you have right now. As a treat.

When we have already learned to abandon hope, that offer is irresistible.