Alexandria Ocasio-Cortez and the Fear of Unequal Attractiveness

How do we know who deserves to date a hot political superstar?

Netflix is streaming a new documentary, Knock Down the House, that follows the stories of four women who took on establishment politics in the 2018 midterm elections. One of those women is Alexandria Ocasio-Cortez, or AOC, as she’s come to be known since winning a huge Democratic primary upset, then a seat in Congress to represent New York’s 14th district. About 35 seconds into the trailer for the film, she says “I can do this,” and we cut to a ginger-bearded man who says, with a smile: “I know you can.” This is Riley Roberts, her partner, a web developer she’s been living with for a number of years. According to AOC’s own mother, he “helped her tremendously” on the campaign. 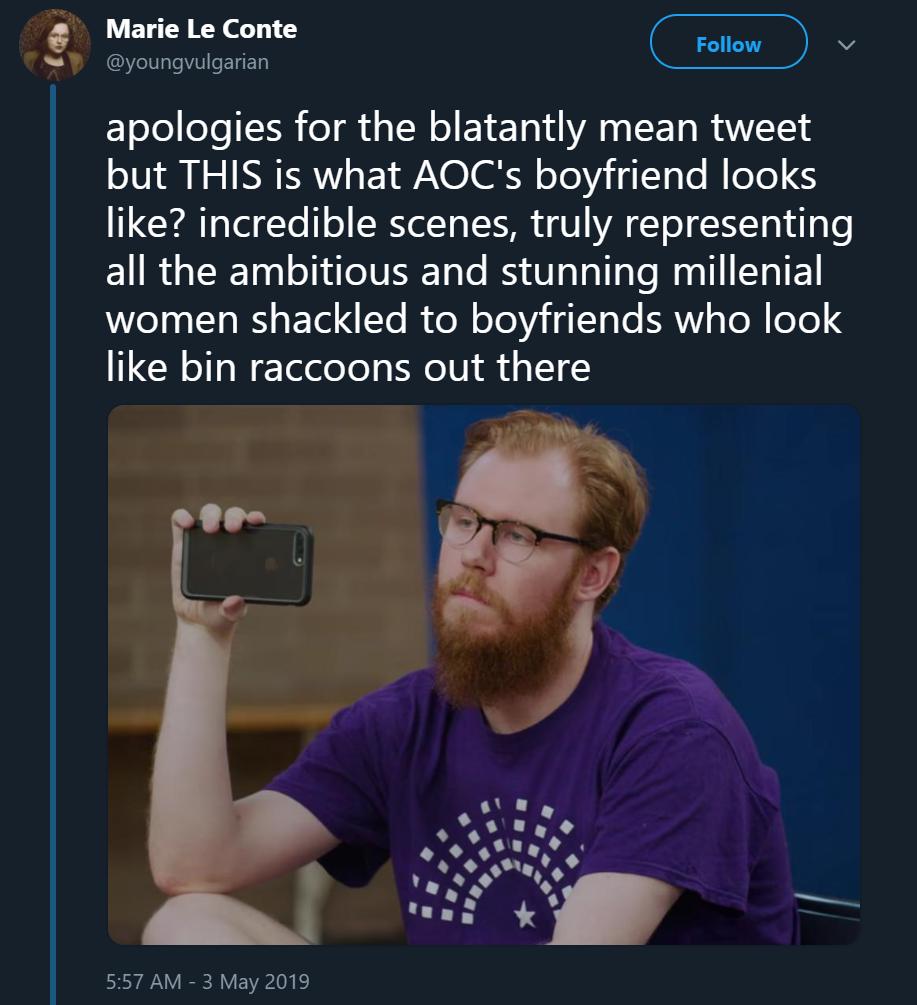 Hoo boy! Spicy. Le Conte, a political journalist and U.K. media personality, later deleted this take while defending it as a “perfectly fine joke,” noting that she’d even referred to herself as a “bin raccoon” in the past, and swore that she’d never call anyone ugly. We don’t have time to delve into the crucial differences between self-deprecation and insult here, but the fact is, Le Conte opened up a real can of worms here.

It may be a controversial statement to suggest that AOC is “shackled to” a guy who sounds sweet and supporting and beloved by her family. But the sentiment that millennial women settle for lesser men is a broadly popular one, and Le Conte is far from the first to have the thought, She’s a bit out of his league, no? Once that opinion had been given (problematic) voice, the jokes about AOC’s taste in men started flying.

This whole cursed discourse, in my view, is a backdoor to commentary on AOC’s appearance as it relates to her success — a minefield of a topic where enlightened leftists are concerned. But let’s go ahead and say it: Ocasio-Cortez is very attractive, and it sure doesn’t hurt her vibrant image to be a young woman of color in a room full of old white guys, nor to be a voice of a progressive faction whose best-known exemplar is Bernie Sanders.

The sheer novelty of casting your vote for a beautiful person may well be the icing on a policy cake. (It was clear, by the way, from the right’s immediate stalkerish obsession with her and desperate efforts to promote the one or two “unflattering” photos of her in existence, that looks were top of mind for her opposition.)

Whether we like it or not, a person’s face figures into the obscure and unforgiving calculus of “electability,” going back to the JFK-Nixon debate in which Kennedy prevailed with TV audiences by “radiating health” alongside his ailing Republican rival. AOC, too, radiates good qualities in media images: resolve, conviction, momentum. It’s no accident that the words “stunning” and “ambitious” were closely linked in Le Conte’s contentious tweet, as if to suggest that Roberts’ scruffiness marks him as a dead-ender in the professional sphere as well as the sexual marketplace. Lost in this assessment is the obvious truth that Ocasio-Cortez must do additional work, well beyond the typical demands of personal beautification, to style herself for a harsh spotlight. When you recall that she’s a literal celebrity, her boyfriend’s apparent “averageness” is not only irrelevant, it’s expected. Try Googling the non-famous spouses of Hollywood A-listers!

And while we’d like to scream, WHO CARES WHAT ANYONE IN POLITICS OR ADJACENT TO IT LOOKS LIKE, there’s no clear way out of what seems to be inborn superficiality. You’ve got Beto O’Rourke angling for women of a certain age with Annie Leibovitz photos and Pete Buttigieg doing his best smolder in Vogue. The most attention Cory Booker’s received is for confirming a relationship with actress Rosario Dawson — which sparked enthusiasm for the possibility of the her serving as First Lady.

The overriding horniness of American life will never be totally absent from contests of government; we want the moral courage of our leaders reflected in their smooth, symmetrical features. It might be better to acknowledge this, as well as the subjectivity of romantic and sexual appetites, than to pretend otherwise. In that light, Le Conte’s tweet, however over-the-top, was a welcome release valve for AOC supporters who do, in fact, think she’s smoking hot — but felt comfortable expressing that in a defense of her partner. Anyway, those two seem really happy! Which is more than most of us can say.