A Somewhat Wobbly History of the Jell-O Shot

As the legend goes, Jell-O shots — those remarkably alcoholic combinations of gelatin and cheap liquor that fuel college parties around the globe — were devised by American mathematician and famed musical satirist Tom Lehrer. “Tom Lehrer takes credit for Jell-O shots,” confirms Bruce Zalkin, president of Original Jel Shot, a company that sells pre-made gelatin shooters, explaining that, sometime in December 1956, Lehrer mixed Jell-O and vodka as a means of sneaking booze into a Christmas party on a military base.

But, as with so many widely held beliefs, that’s not the full story. Certainly, Lehrer himself has spoken about this particular event: “That’s amazing how that got around,” he told journalist Jack Boulware during an interview for SF Weekly back in 2000. “What happened was, I was in the Army for two years, and we were having a Christmas party on the naval base where I was working in Washington, D.C. The rules said no alcoholic beverages were allowed. And we wanted to have a little party, so this friend and I spent an evening experimenting with Jell-O. It wasn’t a beverage.”

“We finally decided that orange Jell-O and vodka was the best,” Lehrer continued. “We tried gin and vodka and various flavors and stuff — of course you can’t sample too much. So we went over to her apartment and we made all these little cups and we thought I would bring them in, hoping that the Marine guard would say, ‘Okay, what’s in there?’ And we’d say, ‘Jell-O.’ and then he’d say, ‘Oh, okay.’ But no, he didn’t even ask. So it worked. I recommend it. Orange Jell-O.”

And I believe that this happened — I really do — but Boulware noted that even Lehrer kind of laughed at the idea that he was the sole inventor of Jell-O shots. Nonetheless, this rumor has held strong over the years, even inspiring comedic musician Luke Ski, better known as the great Luke Ski, to compose his song, “Jello Shots,” dedicated entirely to Lehrer and the Jell-O shot. Here are just a few lines from song, so you can have a taste of his lyrical prowess:

The folks still remember, it was late December
Of ‘56, that was the case.
Serving in the Army, Tom’s planned Christmas party,
No spirits allowed on the base.
‘Sneak it in?’ you may ask, ‘in a small metal flask?’
No way, ‘cause those Sergeants could smell a tin.
So do what you oughta’, use vodka, not water,
Inside a dessert made of gelatin.

“I wrote my song ‘Jello Shots’ back in 2009 as a tribute to the man who invented them, Tom Lehrer,” Ski tells me. “After hearing the legend, and after spending years listening to and loving his comedy music, I got the idea to write a comedy song in tribute to Tom Lehrer and Jell-O shots, in the style of Tom Lehrer, whose songs are mostly just his voice singing along to him playing the piano.”

Interestingly, though, Ski once emailed back and forth with Lehrer, who seemingly admitted to perhaps being less of a Jell-O shot pioneer than the legend would have it. “I was fortunate enough to communicate with Mr. Lehrer himself once, back in 2012,” Ski says. “In an email, he said, ‘I enjoyed your song, ‘Jello Shots,’ very much. By the way, although I may have independently come up with the idea of vodka and Jell-O, as I’m sure many others must have, I didn’t think up the name ‘Jell-O shots,’ and I don’t know who did.’ It meant the world to me to be praised by one of the living legends of satirical music.”

But if not Lehrer, then who the hell came up with the Jell-O shot? For a more historical answer, I reached out to Ken Albala, history professor at the University of the Pacific and author of numerous books about the history of food, including Food in Early Modern Europe, The Lost Art of Real Cooking and Eating Right in the Renaissance. I told him the Lehrer tale, to which he replied, “That sounds like a real Just So Story. Tom Lehrer is a genius, but he didn’t invent the Jell-O shot. There’s stuff that goes back to the beginning of Jell-O that includes wine, so that’s not anyone’s bright idea.”

Now, Jell-O, or powdered gelatin, was invented back in 1845, and while Albala notes that there are recipes involving Jell-O and booze dating back to around that time, he says the concept of mixing gelatin and booze goes back even further. “The earliest recipes are medieval,” he explains, pointing to a cookbook called The Viandier of Taillevent, which was written in or around 1375 and contains recipes for aspics — a dish in which ingredients are set into gelatin — that involve wine. “Most recipes for aspics will include some wine. Some are heavier on it, and some include sherry or port.”

Of course, aspics are a far cry from the Jell-O shots that we know and love (or hate) today, and medieval lads were almost certainly not mixing gelatin and booze for the sake of getting crunk (although, you never know). “The reason why they put wine in these was for flavoring, but also because the acidity in the wine draws out the gelatin from the bones, feet or skin,” Albala explains. “You can make a good stock without wine, but gelatin really likes wine for flavoring.”

If we want to look closer at the history of the more modern Jell-O shot, however, Albala says it probably does coincide with the Lehrer tale, or at least, its timeline. “The way we think of a Jell-O shot now — that is, putting as much alcohol as you can get into a pre-flavored Jell-O mix — is a mid-20th century creation,” he says. “That probably also coincides with those little disposable plastic cups. But I think you could look really hard and never figure out who really invented them.”

“Those are dreadful, by the way,” Albala continues. Which brings up an interesting thought: Why have Jell-O shots, of all alcoholic things, stood the test of time? Zalkin suggests that the “ease of use” of Jell-O shots might be one reason for their enduring popularity — they can be transported relatively easily, you can leave a whole bunch of them out on a table without worrying about them being knocked over, like regular shots could easily be, and so on.

Ski, meanwhile, mentions that the taste and novelty is what does it for him. “I’ve never been a drinker of alcohol in any regular way,” he says. “I could just never get past the bitter taste of most drinks. However, when there are Jell-O shots available, I gladly partake in those, because those actually taste good to me. I think that’s one of the big reasons why Jell-O Shots have endured over the decades. It’s a much more accessible, delicious and fun way to imbibe for people who are new to drinking. Also, I have to assume that it’s the only form of alcohol you can throw across a room and have your friend catch in their mouth. It’s less messy than attempting to spray it, and throwing cans or bottles would likely lead to severe dental injuries. Just chuck a wobbly cube of fruit punch across the foyer and have a good time.”

Albala is mostly on board with this take. “You can’t taste the alcohol,” he says. “If you put in enough flavoring and sugar, you can ingest a lot of alcohol quickly. It’s just an easy, fun way to get alcohol into your system without having to drink.” Meanwhile, Skyy John, of Tipsy Bartender, adds that there might be some nostalgia at play here, too. “We grew up with Jell-O as kids, so Jell-O shots are a natural progression for American adults,” he says. “You don’t stop loving Jell-O because you’re older; you just consume it in a more mature way — with alcohol.”

Still, Albala says Jell-O shots in their current form could use some help. “I’m hoping that Jell-O will be revived,” he says. “I’m hoping to be a herald of this.” As such, he’s currently working on a recipe book that includes improved variations of the Jell-O shot, and at the time we spoke, he’d thought up almost 100 recipes. In fact, while we were on the phone, he took me through his latest creation, which is more like an alcoholic Jell-O cake than a Jell-O shot, but still:

“The one I did for the Super Bowl party had orange juice from fresh oranges, and I cut a few segments out of them. I had a big Jell-O mold, and I set the orange segments, without the skin or membranes, in the bottom of it, and then I poured some orange juice with Knox gelatin and tequila into that layer, just so it would set clear. Then, I mixed a little bit more of that with some yogurt, so it made a white layer. Then, I made another layer with orange juice and tequila. I added in almond extract, rose water and sugar to keep the flavor balance. Then, I did another layer with tequila and crème de cassis.” 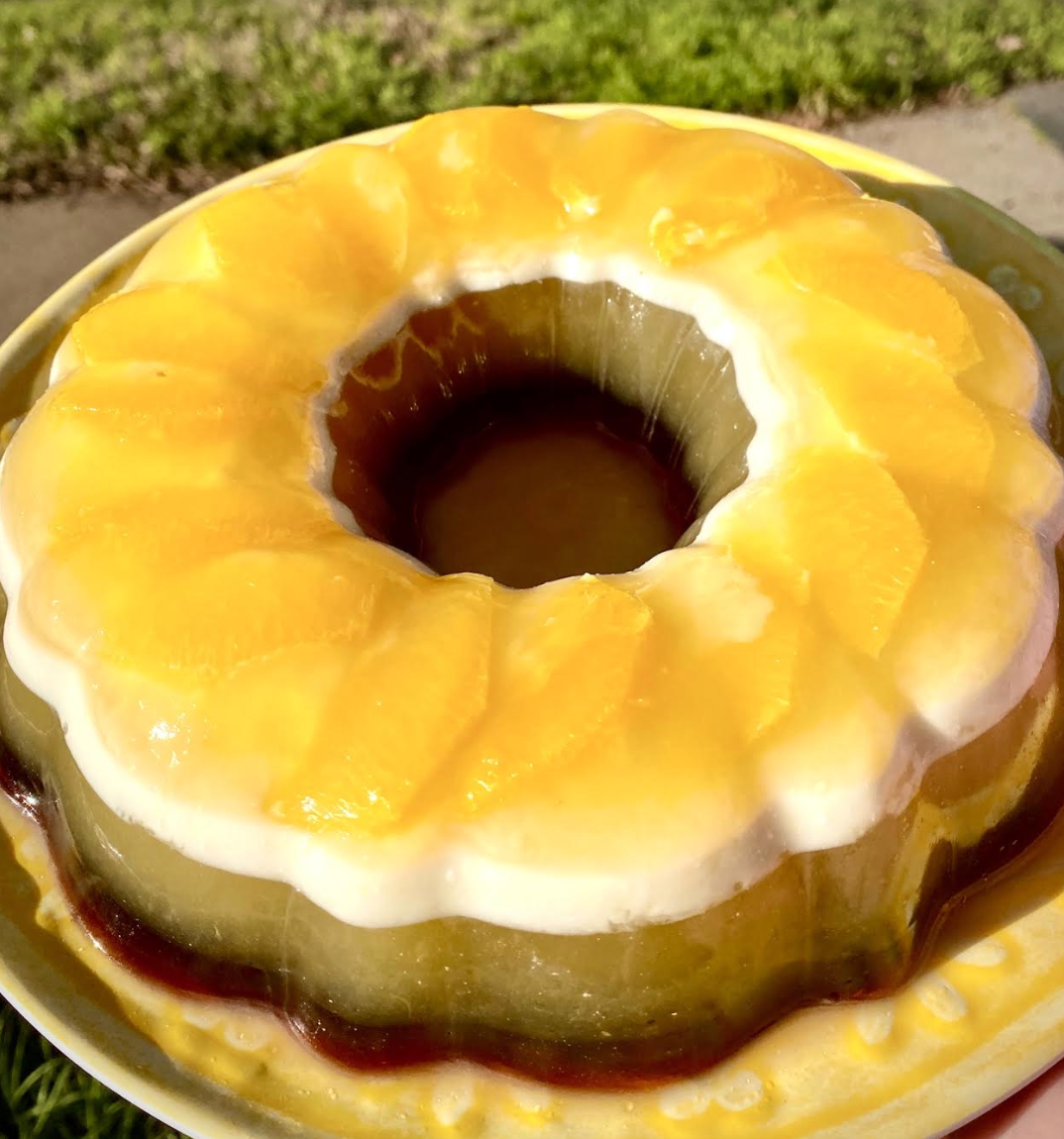 Anyway, in the end, while Lehrer and his fame certainly boosted the Jell-O shot in the eyes of the public, Albala reiterates, “The idea of adding alcohol to Jell-O is as old as gelatin itself.”

Which should be no surprise, because if something exists, it seems that the human instinct is to put alcohol into it immediately.