Attempting to explain the dark, emotional, funny, cringe-y, mesmerizing soul of the trash reality show is hard, but these stans-cum-artists flawlessly pull it off

When Mike Hamm walked into the living room after dinner to find his girlfriend watching a new show called 90 Day Fiancé, something stirred deep inside of him that he hadn’t felt since he stopped pursuing a career in illustration a few years earlier. The 37-year-old had graduated with a degree in fine arts, but he had long since resigned himself to doing a few doodles here and there in his spare time.

Perhaps, though, he just hadn’t found his muse — someone like Asuelu, the Somoan bachelor staring back at him from the screen. “I couldn’t look away,” Hamm tells me. “The show is this horrifying, intoxicating trainwreck. As painful as it is to watch sometimes, you just can’t look away.”

And so, Hamm dusted off his artwork and drew Asuelu, “mostly just to make my girlfriend laugh.” He had no intention of sharing it publicly — those days are long behind him — but when his girlfriend put it on the fridge, she implored him to post it to the show’s subreddit, r/90DayFiancé. “I didn’t expect it would get any attention, but people really responded positively,” he explains. 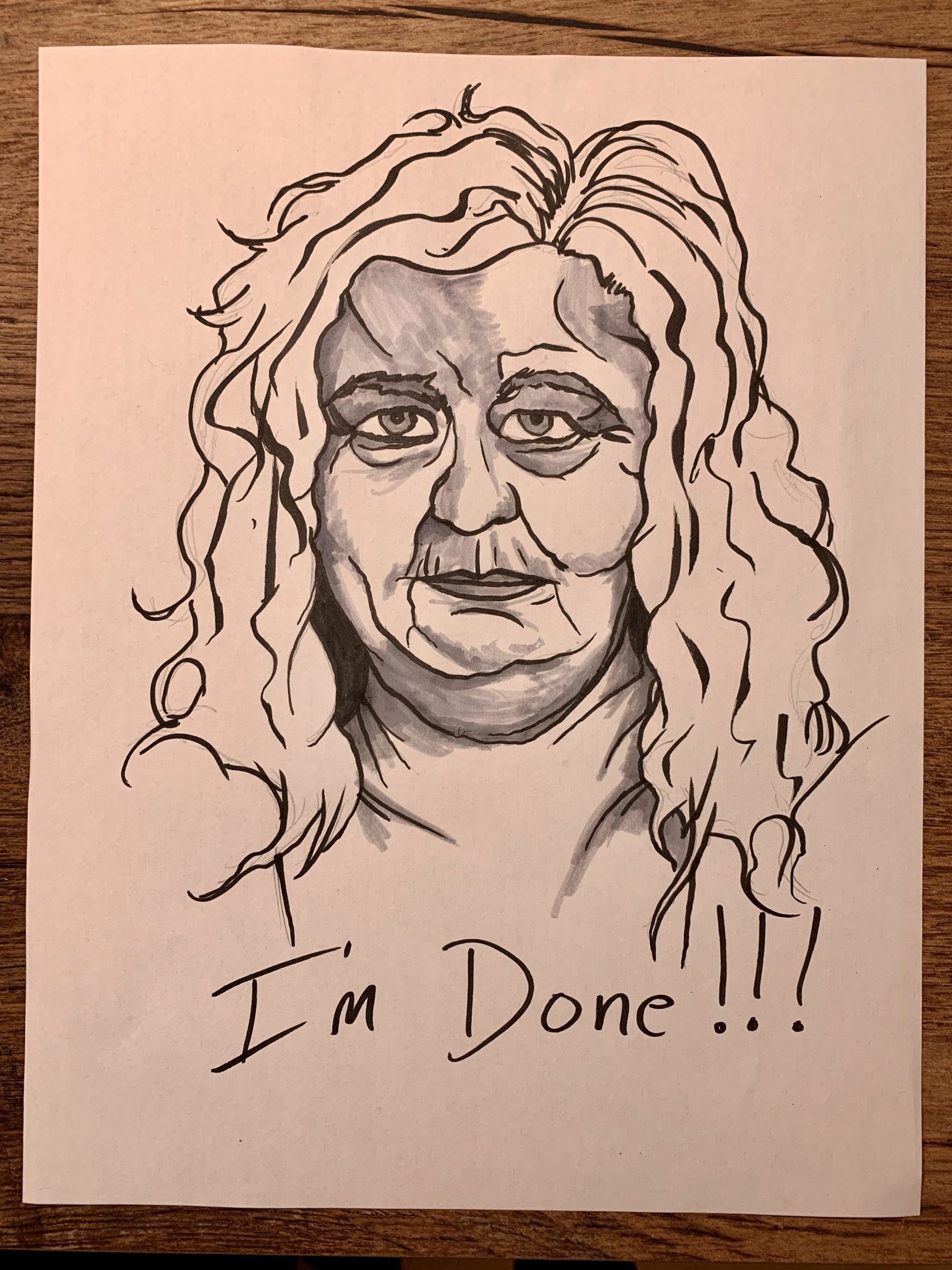 He hasn’t stopped watching the show — or drawing its cast — since. “It became a weekly ritual for my girlfriend and I,” he says. “We even went back and watched earlier seasons so we could understand these people better.” And though he admittedly struggles to find the words to describe how exactly the show makes him feel, he explains that “the art, while simple, reflects the subjects convincingly.” 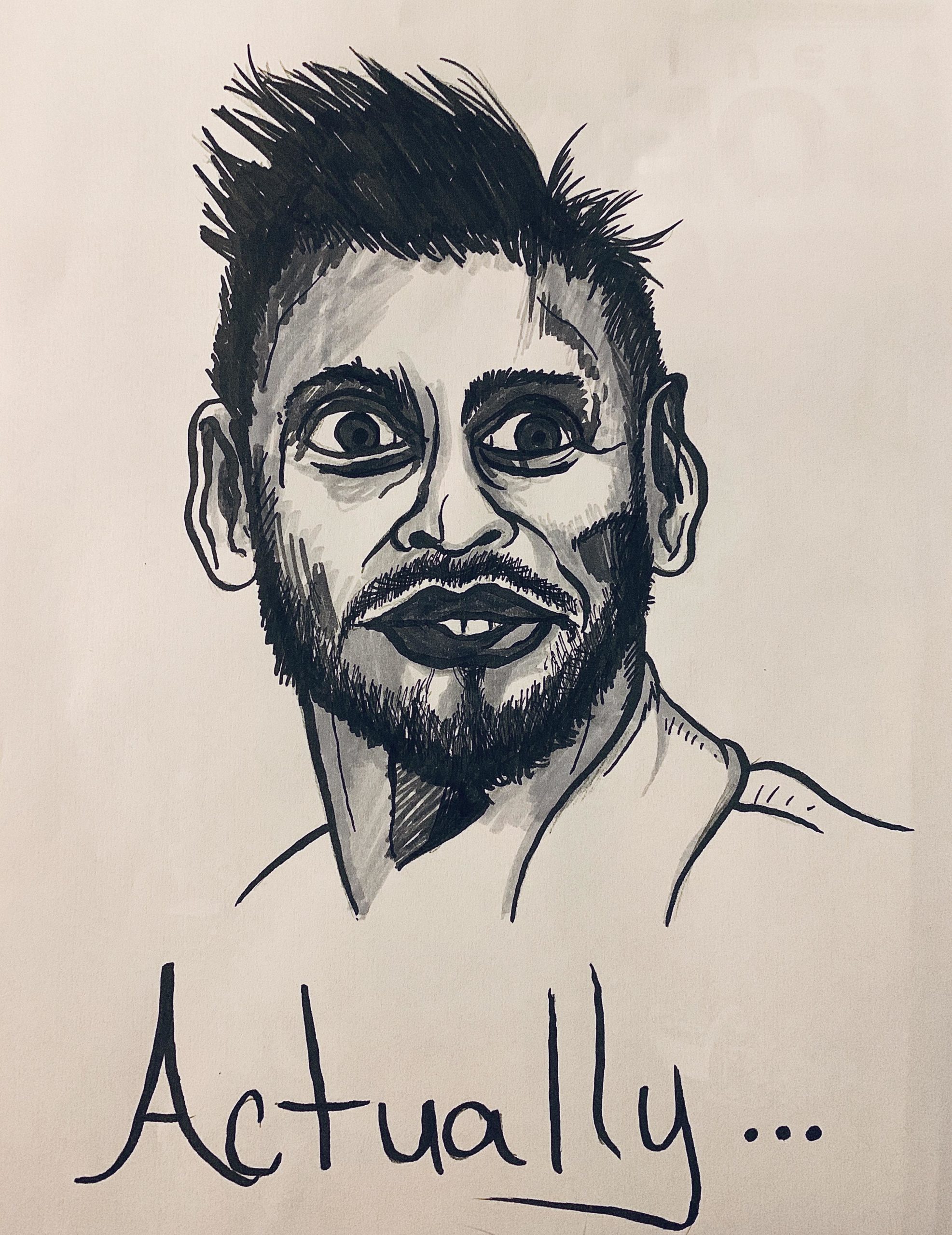 On r/90DayFiancé, artists like Hamm regularly post their attempts at capturing the show’s essence — in a paradoxical array of styles. From pop-y bright colors with funny catchphrases, to grotesque caricatures done in heavy oil paint or charcoal, to recreated scenes through balloon art, 90 Day Fiancé fan art is as disparate and chaotic as the show itself. 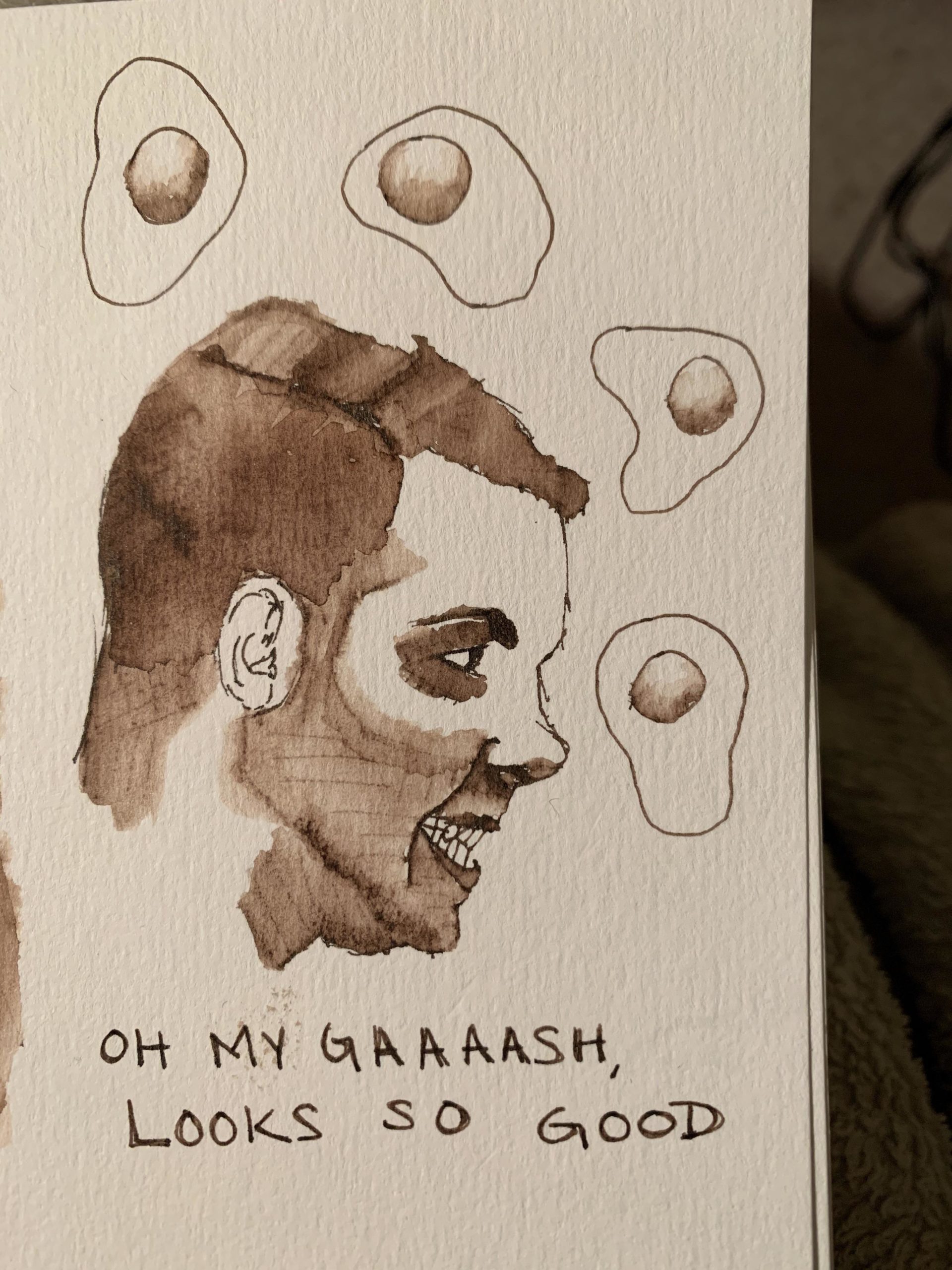 “That egg scene was beyond imagination,” Sarah says. “Obviously we all know he could care less about basic ass eggs and he’s just trying to win Melyza’s heart back one overblown compliment at a time, but his total lack of self-awareness in that moment made for a superb 90 Day image.”

Despite not “consciously thinking about it at the time,” Sarah says she likes how the dark, grim nature of the final product “reflects the grimness of this show.” “Like, it’s all fun and games to us as the viewers,” she says, “but these are some really disturbing situations and people.”

“People seem to get a kick out of me drawing the characters dressed as giant babies.”

“I got into the show because I’m absolutely obsessed with reality TV,” says Chantel Lavender, a British 90 Day stan who designs and develops shoes by day and does a little graphic design on the side. “It’s a great release after trying to be serious all day at an office job. A friend at work suggested I try out 90 Day Fiancé, and I was hooked from the first episode. Next, I got chatting to fans of the show through Reddit, but I soon found some great meme accounts on Instagram, too. Generally 90 Day fans seem to have a great sense of humor, so they get a kick out of me drawing the characters with funny quotes or dressed as giant babies.”

“Another thing I love is that the people on the show interact with the fans so much and support the fan art. I’ve had some lovely interactions with Erika, Darcey, Kalani and Juliana. It must take a big toll on them getting memed about so much, but it’s really nice to know they enjoy the fan art. I even got to do some shoes for Erika, which was a big highlight of my year.”

“Despite hating vomit, I had to rewind to make sure I hadn’t imagined what I saw.”

“I’ve always tried to use art to capture the world around me,” explains Elizabeth Prillaman, a 29-year-old artist in Virginia. “There’s some serious introspection that goes into creating any artistic work, and it’s always been a lens through which I’ve interpreted the world.”

Prillaman says she slowly accumulates all the “little nuances that capture a subject” before she constructs her depiction — a technique she’s developed from painting dog portraits in oil. “I usually ask people what the dog is like and infer from the photos sent to capture the je nais se quoi in the portrait,” she tells me.

When it comes to 90 Day Fiancé, she finds a scene that perfectly encapsulates the spirit of a certain character, then rewinds and watches it over and over again to absorb every detail. “There’s a very memorable scene when Jon is going to pick up his love from the airport, and on the way, he vomits twice onto the sidewalk. Then, he whips out a toothbrush,” Prillaman recounts. “It was surreal, and despite hating vomit, I had to rewind to make sure I hadn’t imagined what I saw. I didn’t. On my second ‘close watch,’ I noticed he said, ‘I need to clean this up’ after he vomited onto the street. I had uttered that exact phrase not five minutes earlier while looking at my workspace, so I knew what I had to do.” 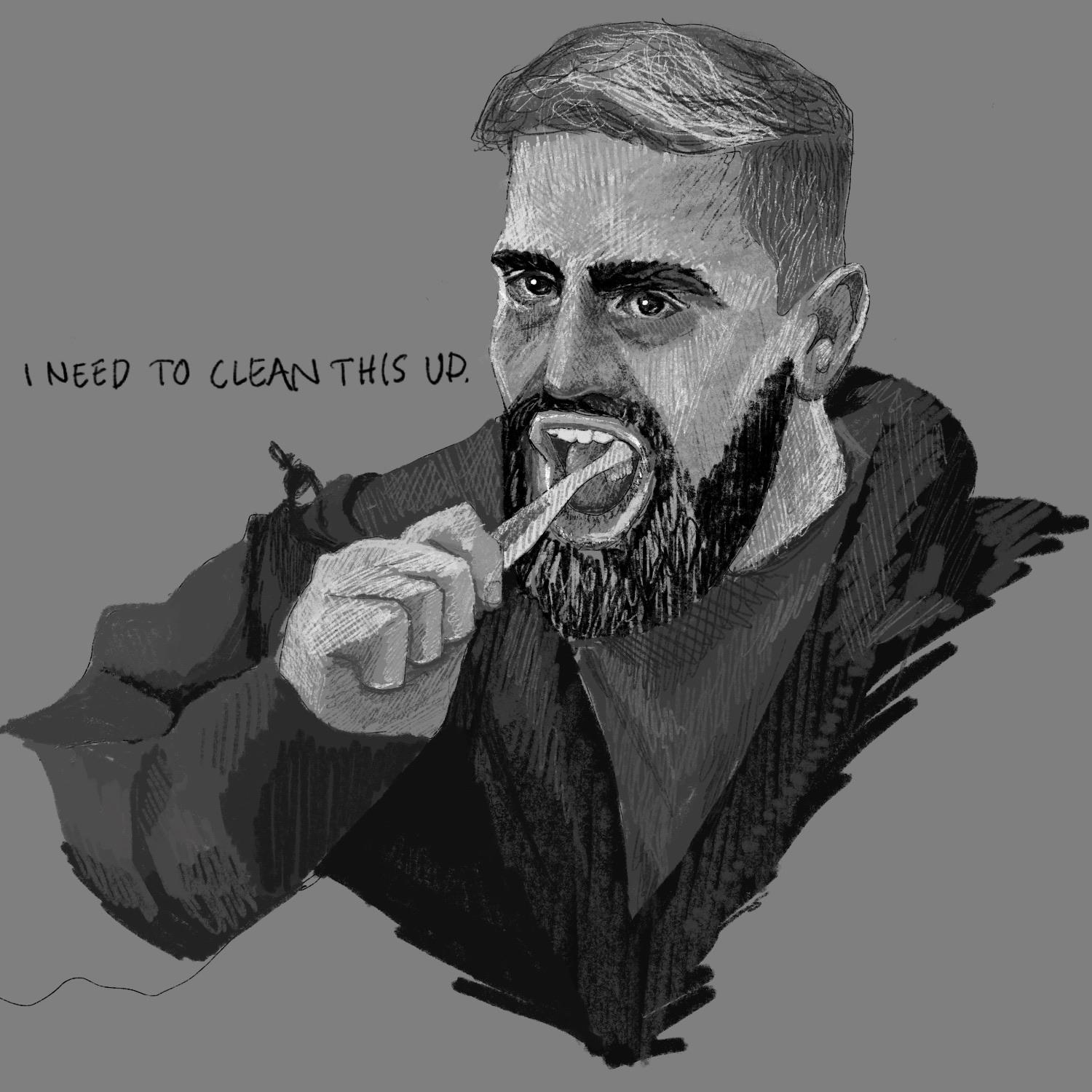 As for her interpretation of Mother Chantel, Prillaman explains, “She’s very slow and deliberate, so I went over my initial sketch with my attempt at a very sparse smooth outline and then deleted the original sketch layer so I just had the outline. I filled it in with delicate tiny strokes and shading. It seemed like the appropriate way to depict a woman as deliberate as she.” 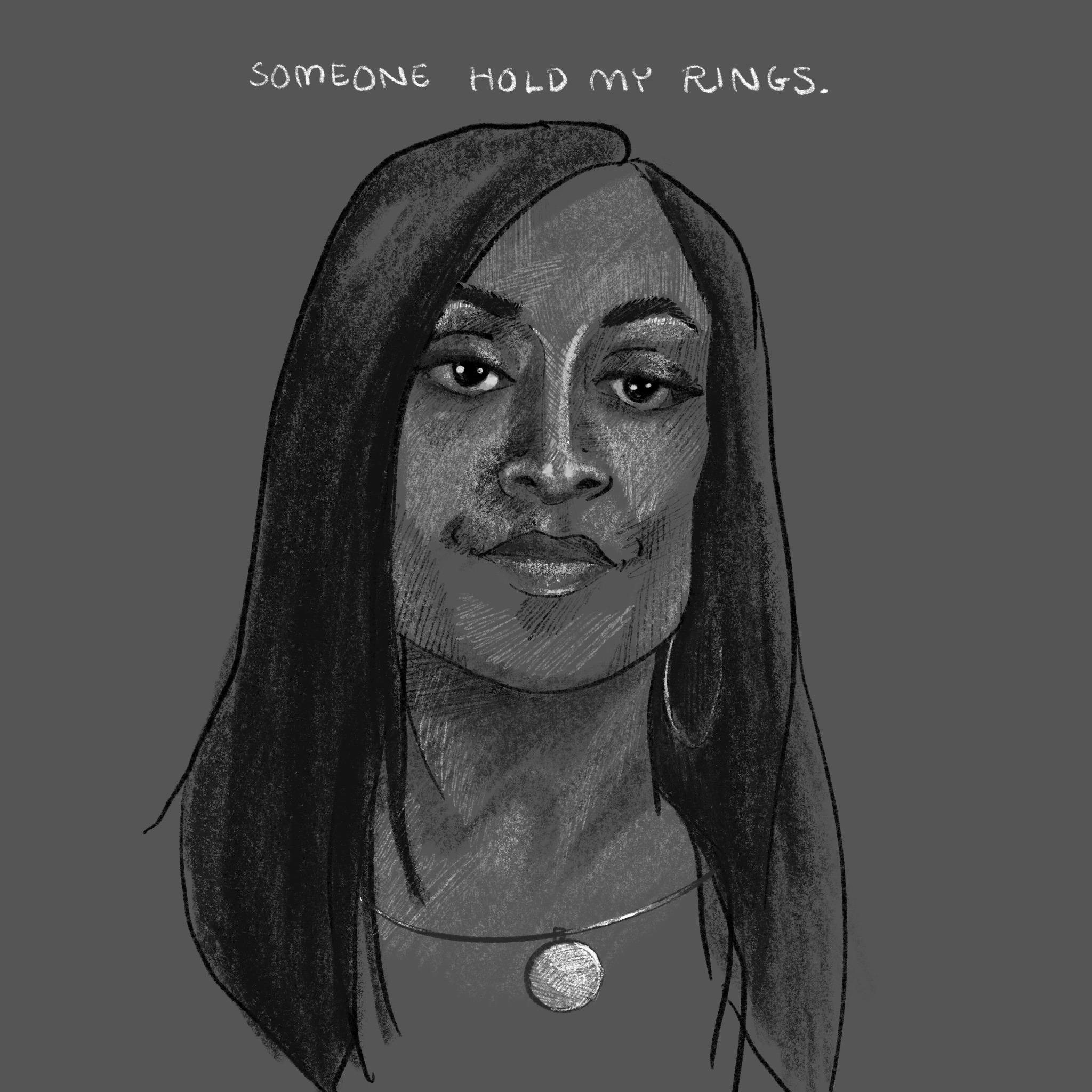 “She literally looked like E.T. so I had to capture that scene accordingly.”

Karoline Skomedal is a 24-year-old in Norway who “got into the show purely by accident, and was pulled in by the amazing, fascinating collection of weird personalities all in one place.”

To best capture those personalities, Skomedal uses Gouache paint, and attempts a “sort of cross between a portrait and a caricature, where some features are accentuated, while the likeness is still there.” For example, “For Colt and Debbie, I focused on their bizarre mother/son relationship and tried to add things to make that clear.” 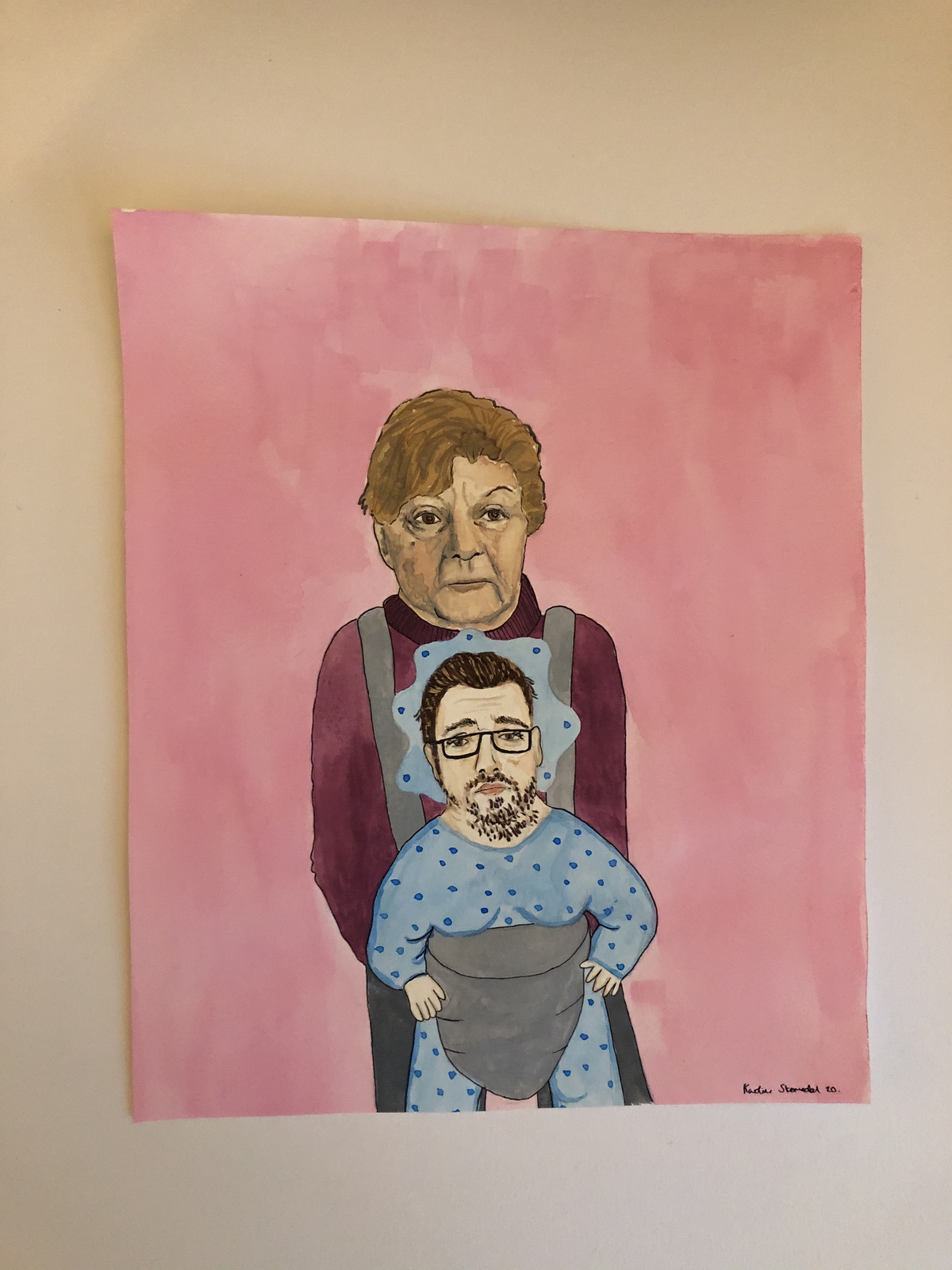 And, for Lisa, Skomedal explains, “She had on a headcovering and was making a pose where she literally looked like E.T., so I had to capture that scene accordingly.” 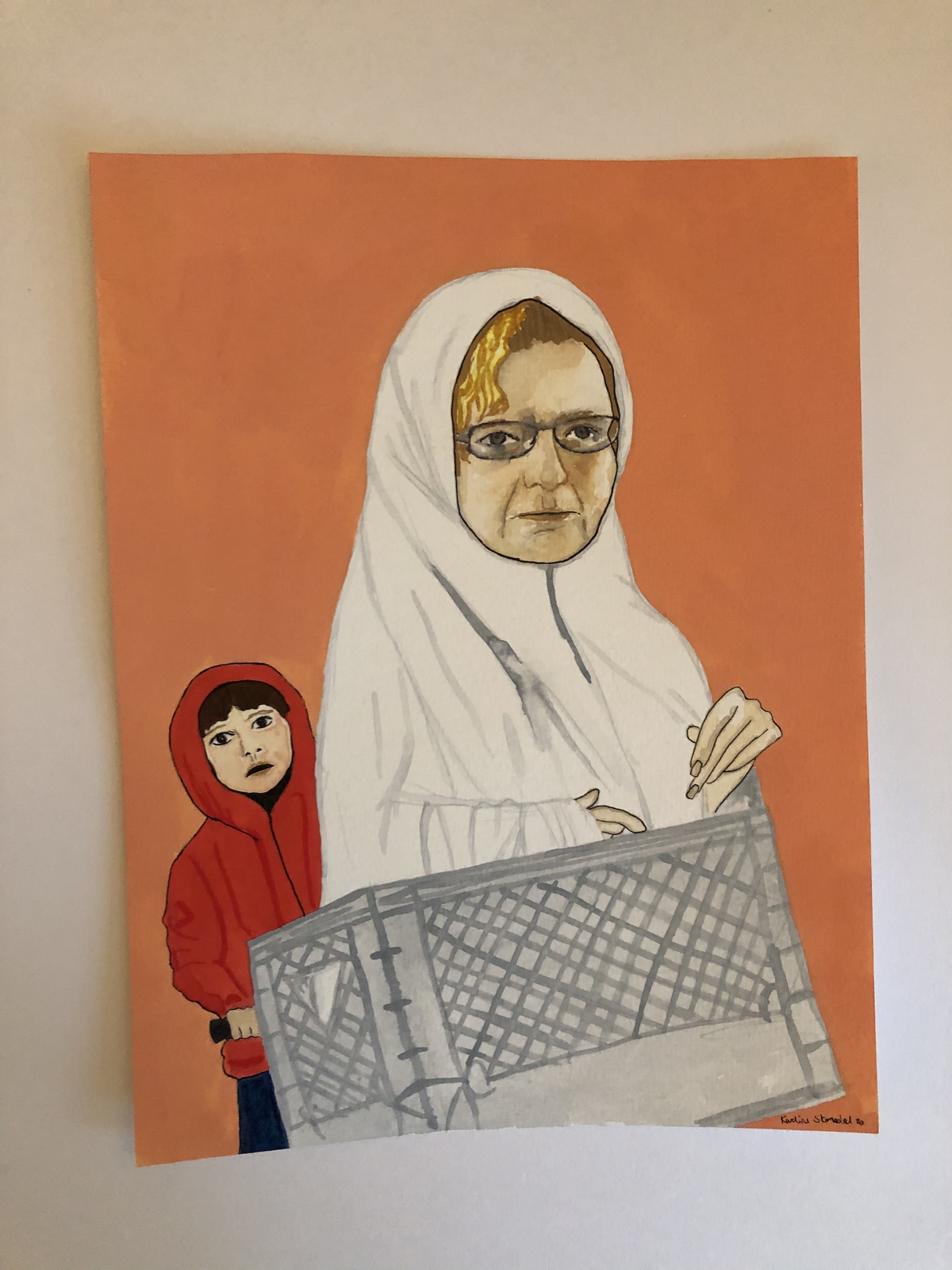 “The ultimate candy-coated piece of shit to eat on Sunday night.”

“I’m a 46-year-old white guy, originally from the Philly suburbs and now in the Charlotte suburbs,” Elvis tells me. “I graduated with a BFA in painting and drawing but have been working solely as a graphic designer since graduating college in the mid-1990s.”

Elvis says he began watching 90 Day Fiancé after hearing about it on the radio. “Thinking back to the first season [in 2014], it was so much more innocent. They were these couples with the best intentions, trying to navigate moving over to the U.S. and fumbling through a combining of cultures,” he says. “It has since been ‘perfected’ and morphed into, for the most part, a garbage show about garbage people wanting garbage fame, making it the ultimate candy-coated piece of shit to eat on Sunday night.”

In terms of his art honoring the show, at first, Elvis didn’t care whether or not it “sucked” because the show itself is an “unapologetic catastrophe.” But when he tried to draw Big Ed, “one of the more interesting looking characters” on the show, “it was horrible.” “I crumpled it up almost as soon as my pencil left the paper,” he continues. “But thankfully, I started again and tried Darcey, which turned out dreadful, too.”

Still, Elvis posted the finished product to Reddit, where the response was great. “For the most part, the subreddits have been very supportive and sweet people, but my butthole always puckers a bit when posting something,” he says. It’s stayed unpuckered enough, though, that not only has he kept posting, he’s started selling his artwork on Etsy as well. “Selling a mug with art that I made and that makes somebody laugh has been more rewarding than anything I’ve done in my 20 years of graphic design,” he tells me. “How fucked up is that?”

“I want to do Stacey next, like a little postcard twin diptych with her and Darcey, as they look at each other and shit on Tom.”

“The scene that compelled me to paint Darcey was where she and Stacey met for a post-Tom discussion after that season,” explains Margret de Guzman, a 34-year-old health-care worker in Illinois. “They had these huge lattes or something with these huge matching tangerine sunglasses and huge matching lips. There was a shot of Darcey leaning toward Stacey with her face on her hands, I believe it was sometime after they were shown getting lip injections. I loved the shots between the two of them, looking at each other, with the cafe scenery in the background, Darcey’s eyebrows tilted up to the heavens in rapt, sincere attention, and I felt compelled to take screenshots of the two of them. I painted the Darcey screenshot right away. I want to do the Stacey screenshot next, with her lips equally pursed, like a little postcard twin diptych, looking at each other and shitting on Tom.”

“The scene that initially inspired me was when Michael displeases Angela by being Michael, and so, he decides to greet her with a cake,” says C.C. Biedron, a 31-year-old legal assistant in Chicago. “In the past, he brought her a cake to smooth things over after a squabble, so you can’t blame him for thinking it’d work again. It didn’t, of course.”

What separates Biedron’s work from all the others, however, is that her canvas is — wait for it — balloons. “The ridiculousness of what I had just witnessed stayed with me, and I wondered if I could recreate that scene with my balloons,” she explains.

Last spring, Biedron found a job posting on Craigslist where a restaurant chain was “searching for balloon twisters to walk around and entertain people while they wait for their food.” Thinking it would be a fun experience, particularly because the job required zero requisite balloon art skill, she applied. She has since opened up an online shop for her balloon decorations, but balloon flower baskets don’t quite quench her artistic passion like recreating scenes from 90 Day Fiancé.

“I painstakingly crafted Angela’s sagging chest and Michael’s dead-eye stare and was so excited it looked like them that I wanted to share it,” she says. “When I posted my first balloon ‘scene,’ I thought maybe one or two people would get a kick out of it, but the response was overwhelmingly positive. Honestly, I still can’t believe it.”

Appropriately enabled, Biedron has continued to express her reflections on 90 Day Fiancé through balloons. “The show has devolved into a total dumpster fire. It’s like watching a small child get drunk, stumble into the family car and drive into a telephone pole,” she concludes. “You know it’s terrible, you know it’s trashy and you know you should look away. But in the end, it’s comforting to watch people struggle with love as much as I do.”