Whether it’s a 2D, 3D or 4D version of the game, they humbly submit that it doesn’t take *that* much brain power to excel at

In the Age of Trump, chess has served as a popular metaphor for reporters describing the oft-confusing political behavior of the president. In 2015, for example, the Washington Post referred to Trump as a “political chess master” who “outmaneuvered” his Republican rivals to assume the party’s nomination. And when Trump announced plans to place higher tariffs on Chinese goods, his supporters referred to the move — considered by most economists as a huge mistake — as a cunning strategy in a “chess match” that people lacking the president’s intellect were simply unable to see.

In fact, some of Trump’s ride-or-die fans — most notably Dilbert creator Scott Adams — insist that the commander-in-chief is so smart that he’s not playing just any old regular game of chess. No, he’s playing three-dimensional chess, an argument parroted on The Donald subreddit as well as 4chan. 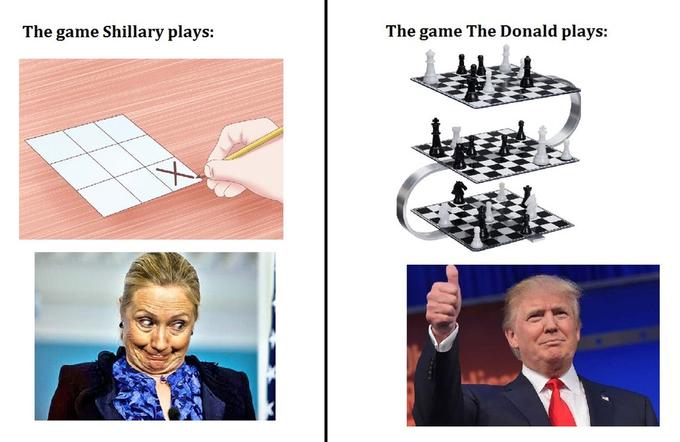 It turns out, though, the entire premise is faulty — and not just because Trump isn’t as smart as he or his supporters think. “Chess’ association with genius is exaggerated,” says Jonathan Rowson, a former British chess grandmaster and author of The Moves That Matter: A Former Chess Grandmaster on the Game Of Life. “That’s largely because of the public perception that chess is a difficult game that you have to be very smart to be good at. But that isn’t entirely true. Chess is an easy game that merely requires practice and experience to master, rather than innate logic or just intelligence.”

“I think that whenever someone uses the analogy of chess when talking about politics,” Rowson continues, “it’s not necessarily because they think that person is a genius. It’s also because they feel comforted by the idea that there’s a big plan, that it’s not all random moments and things that happen by chance — even though most of the time, it is.”

Chess legend Garry Kasparov wholeheartedly agrees, especially when the comparison is applied to Trump. He told Politico in 2017, “Trump operates in really a short-term environment. … The way he communicates with the world definitely shows a lack of any strategic calculations. … So when I hear phrases like ‘Trump plays chess,’ I feel I have [a] duty to defend the game that I’ve been playing for decades.”

Meanwhile, in online chess communities, there’s often bemusement over the notion that Trump could grasp the game — so much so that they imagine his opening play to be tipping over the entire board. “The chess analogy annoys me, and I know it annoys other players, too,” says the Toronto-based Alan Pan, who has made YouTube videos on how to play 4D chess.

When I ask Pan, who works as a software engineer by day, about the belief that playing 3D or 4D chess requires more intelligence, he laughs. “Most people have only heard about multidimensional chess through The Big Bang Theory or Star Trek. Sometimes they’ve seen the boards, and because they’re stacked up, they find it hard to figure out how you’d play the game,” he explains.

But again, it’s easier than it looks. Or as Pan explains to me, while it’s difficult to describe how a game of 3D chess works, it doesn’t necessarily require an added level of intelligence. If anything, he says, it works the same way as any other game. “With any game, you always have to think a couple of steps ahead, and visualize the whole board. With 2D and 3D chess, it’s the same thing. With 3D chess, you just have to remember that the board is a cube, so the possibilities, combinations and probabilities are different. But there are things you can do in normal chess that you can’t do in the 3D version, and vice versa.”